Your Body Uncovered With Kate Garraway; Joe vs Carole

“The programme was smart enough not to lose sight of its public service impulse, demonstrating how properly visualising afflicted areas can be enormously helpful, even therapeutic” 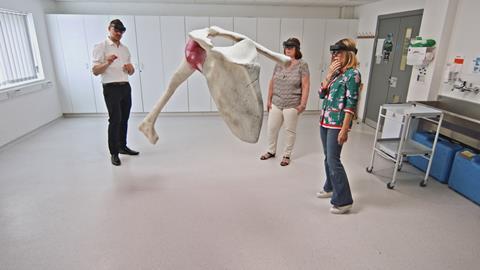 “On the face of it this latest format was slightly gimmicky, projecting as it did augmented 3D images of the insides of people who just wanted curing. But for all its gawping, the programme was smart enough not to lose sight of its public service impulse, demonstrating how properly visualising afflicted areas — facing your enemy, as it were — can be enormously helpful, even therapeutic.”
Ben Dowell, The Times

“That Your Body Uncovered With Kate Garraway succeeds at all is down to her genuine interest in people and ability to say the right thing with the right degree of sentiment. The base fact is that Your Body Uncovered is, once the novelty has worn off, quite boring. Garraway just about keeps the whole thing together with her warmth and wit, but it’s hard to avoid the feeling by the end that however clever the technology and able the presenter, this approach just won’t do any more.”
Lucy Mangan, The Guardian

“Every week the back page of The Dandy ran an advert for X-ray specs, price five shillings: ‘Amaze your family! See their skeletons!’ If I’d seen Kate Garraway’s wondrous 3D virtual reality — or VR — goggles on Your Body Uncovered, nothing could have stopped me filling in the coupon and sending off my postal order. Once we’d seen the spectacular 3D images, though, this show didn’t have a lot more to offer.”
Christopher Stevens, Daily Mail

“I was left with more questions than answers. Are these methods used in real-life diagnosis? If not, why not? Why had these women been allowed to live in such pain for so long? More interrogation into the whys and wherefores would have been appreciated. And we met Dr Karan Rajan, who gave unnecessary asides à la The One Show about the price of painkillers. The result watered down an otherwise interesting and innovative programme.”
Emily Baker, The i

“Sinking its claws into one of the weirdest stories ever told, it is a notably sober-minded and engaging revisiting of the feud between big-cat magnate/talking mullet Joe Exotic and his animal welfare nemesis Carole Baskin, whom Exotic was accused of plotting to kill. Kate McKinnon and her co-producers must be credited for conveying the tale in as serious-minded a fashion as possible. In so doing they have achieved something the original Netflix documentary had little interest in attempting. Pushing past hillbilly cliches, they’ve succeeded in portraying Exotic and Baskin as living, breathing human beings.”
Ed Power, The Telegraph

“Like those before it, Joe vs Carole attempts to take a more nuanced approach to pop culture caricatures, but struggles to align its ambitions with its contents. Unsure if it wants to be a sensitive portrayal of trauma or a comedy skit, Joe vs Carole instead decides to be both. It leaves giggle-inducing metaphors to do the heavy lifting and dramatises real-world horror with a neon-soaked, pop-video sheen. Tiger King’s appeal – however misguided – was its proximity to reality, and the voyeuristic thrill of watching a convoluted and undeniably loopy story. Joe vs Carole merely photocopies it, resulting in something neither illuminating nor emotionally cathartic.”
Adam White, The Independent