TV oddities are my guilty pleasure

More than ever, 21st century TV is the equivalent of the freak show, says Steven D Wright 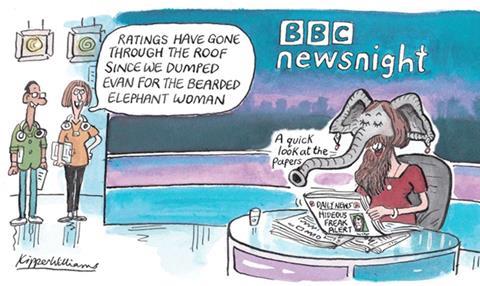 As a big-name columnist, I should probably be writing something insightful and intellectually challenging about Ebola or the rise of Islamic State.

Yet I find myself drawn to the bizarre and brazen side of TV. It’s embarrassing to admit that I prefer Family Guy to Newsnight, even with its dashing new host Evan Davies – and if I do switch on BBC2 by mistake, I just can’t get past the thought of his ‘Prince Albert’ penis piercing.

It’s shameful, but for cheap sensation-seekers like myself, the shock return of Cilla Battersby- Brown in Coronation Street is much more earthshattering than a news report on a deadly virus. And who cares about the goings on in Syria when the real media talking point is that glaucoma, not his massive ego, is the reason Bono wears ridiculous sunglasses indoors?

But if even Bono could stop being a twat, surely I could too? I immediately decided to get serious and start watching ‘proper’ grown-up telly. But, once again, I got bored with Brian Cox pontificating on the Human Universe and flicked over to the new season of American Horror Story: Freak Show on Fox. It is a real eye-opener and got me thinking.

Set in a Florida freak show in the ’50s, it is full of actors with genuine disabilities plus unsettling CGI creations like two-headed Siamese twins, hermaphrodites and lobster boys, among others. Bizarre and brilliant, American Horror Story is genuinely fascinating, especially when the bearded lady moans about the 1950s public abandoning freaks thanks to Lucille Ball entertaining them on their new-fangled TV sets.

But if TV was responsible for the death of the old-fashioned freak show, it seems 21st century TV has wholeheartedly re-embraced the concept (and I’m not even mentioning Endemol USA’s forthcoming docu-soap about a freak show in LA). From the now established tradition of shock docs to daytime shows, you only have to flick on C4, C5, TLC or Discovery to gawk at someone with giant testicles, a giant tumour or a giant tummy.

Even if there isn’t an obvious physical oddity on offer, behaving freakishly is also telly gold – as reality TV ‘casting producers’ know well. They seemingly carry a database containing details of every single freakishly loud-mouthed ‘character’ in the UK.

Somehow, acting up, being rude or foulmouthed will get you on a primetime series. In fact, it’s even better if you are moronic with delusions of grandeur – otherwise, why would Lord Sugar restrict his search on The Apprentice to this type of person for the past decade?

But why I am getting all huffy about it? It is – and has always been – this way in TV. The only people who shine on screen are egocentric sociopaths who care about nothing except themselves. From psycho presenters who exhibit horrendous behavioural patterns to gobby wannabes on The X Factor, in truth they are all hideous freaks of nature.

Behind the camera, of course, it is a different set of human conditions. Now it is the turn of the bullied rather than the bullies, the super-intelligent, shy geeks who didn’t lose their virginity until their mid-20s. In a reverse of the Marvel superhero world view, here it is creative oddities with mental superpowers that triumph.

Actually, maybe this is why Evan fits in so well on Newsnight after the monstrous Paxman – and why I am not such a freak for liking the oddballs. If he is revealed to have freakishly big balls, I might even start watching again.