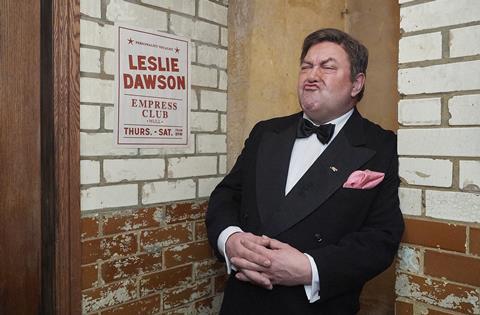 “Episodes of Urban Myths can be hit-and-miss affairs and sometimes a little pointless, but this was beautifully judged. It was Mark Addy, last seen as the tenacious detective in White House Farm, who was the best performer, here nailing the older Les Dawson in voice and demeanour in the best Urban Myths I have seen so far.”
Carol Midgley, The Times

“Steve Pemberton told Dawson’s story with aplomb, leaning into the archetype of the comedian as a sad clown. Urban Myths tends to relate the exaggerated, outrageous lives of Hollywood’s most glamorous stars. This proved it doesn’t have to; that the earnestness of a northern lad with a dream makes for just as interesting a story.”
Emily Baker, The i

“This has been a terrific series, Perry having a knack of putting his finger on truths about the way America, like Britain, has divided into extremes, the middle ground in culture almost being a ‘dirty word’. Perry nailed it when he said that people’s political beliefs often stemmed from something deep within their emotional identity and the only solution was for everyone to have more empathy and understanding for others’ points of view.”
Carol Midgley, The Times

“The series has been uneven but this final instalment provided food for thought. It is not unusual to hear the voices of Trump supporters, but when they appear on the BBC news bulletins they are usually book-ended by the disapproving tones of Jon Sopel. Perry made an effort to understand them.”
Anita Singh, The Telegraph

Agatha and the Midnight Murders, Channel 5

“The Queen of Crime and her legacy were thoroughly traduced in Agatha And The Midnight Murders. Helen Baxendale played the novelist as a devious, callous double-crosser willing to stitch up her publishers and kill off Hercule Poirot to evade bankruptcy. It was all confined to three cramped sets, with the cast as posed and static as a third-rate am-dram production.”
Christopher Stevens, Daily Mail

“It was a classic and atmospheric locked room whodunit – deaths piling up, everyone a suspect, plenty of red herrings. For all the production’s faults, the whodunit was effective, because I stuck with it to the end in order to discover the identity of the killer.”
Anita Singh, The Telegraph

“Tommy could have become an adorable heroine for our times, but she blows it. In the first episode, she becomes white saviour to Maria, the kind of liberal narrative arc cop shows have been rolling out since Hill Street Blues. In 2020, this storyline should have turned in its badge and gun.”
Stuart Jeffries, The Guardian