Us; The Singapore Grip; Five Guys a Week

“The first episode did not disappoint, capturing the novel’s winning blend of poignancy and wry humour” 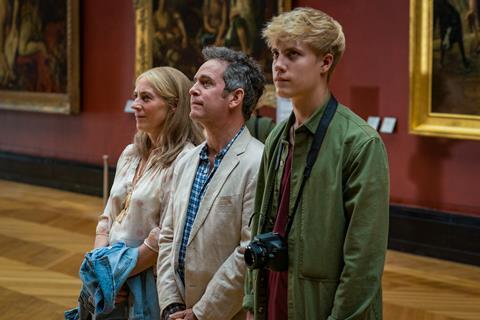 “Occasionally the middle-class, massive-kitchen-ness of Us can teeter just on the edge of smug, but in the end I was charmed, and as strange as it is to feel nostalgic for such a recent period of time, that nostalgia was felt keenly. The cast are all great, but particularly Tom Hollander and Saskia Reeves, who warm up characters that could be cold.”
Rebecca Nicholson, The Guardian

“The first episode did not disappoint, capturing the novel’s winning blend of poignancy and wry humour. Hollander is the perfect choice to deliver Douglas’s sarky quips, yet he also transmitted the simultaneous gravity and ridiculousness of his character’s predicament. Occasionally, the dialogue felt overly neat, like it was written for stage rather than screen – but when a show boasts the cheering sight of Hollander whizzing around Paris on an electric scooter, it feels churlish to complain too much.”
Gwendolyn Smith, The i

“Tom Hollander captures emotionally inadequate Douglas so perfectly that, from the first scene, it felt as if we had known him for years. He never shows off. Everything is suppressed and tightly knotted, like the ties Douglas wears. Doctor Foster was the last family drama on TV that was half as good as Us.”
Christopher Stevens, Daily Mail

“This was an adaptation that didn’t embarrass the novel for two reasons — 1) a good script, written by Nicholls, and 2) Tom Hollander. This was a good telling of this tender, heart-wrenching story. And a reminder not to take relationships for granted.”
Carol Midgley, The Times

“It all made for an enjoyable watch. But it needed more bite. What we mostly get is a gentle romcom. A scene in which Douglas sobs in the car at the council dump should have been both sad and funny, but it was neither. Like Douglas and Connie’s marriage, Us drifts along nicely but needs more spark.”
Anita Singh, The Telegraph

“The Singapore Grip rubs along all right as a farce, a sort of Carry on Up the Causeway in which every man is a cad or a nincompoop and all the women are sexpots. Unfortunately, that’s not what it’s aiming for. Screenwriter Christopher Hampton promised us that this six-part series would darken as the Japanese invasion drew closer. Well, by the end of this episode they were dropping bombs and our female characters were still arguing over who had the bigger breasts.”
Anita Singh, The Telegraph

“TV loves a period production, crammed with classic cars and romantic costumes. This one looks splendid, and the story rattles along, but it is an unexpected choice. The Army types are idiots, the women are snobs and Asian characters are mostly seen but not heard. This drama wants to be Downton Abbey in the sun, but it can veer into It Ain’t Half Hot Mum.”
Christopher Stevens, Daily Mail

“Five Guys a Week is a cheesy, slightly bonkers format but an oddly addictive one. It was soapy, pacy and enjoyably trashy.”
Michael Hogan, The Telegraph