Van Meegeren: The Forger Who Fooled the Nazis

“Andrew Graham-Dixon navigated the story most entertainingly, veering between disdain and astonishment that a bespectacled little conman brazened it out for so long” 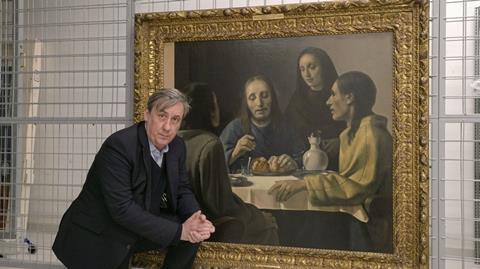 Van Meegeren: The Forger Who Fooled the Nazis, BBC4

“In this rollicking tale we learnt that the audacious forger was knocking fakes out like fridge magnets. Andrew Graham-Dixon navigated the story most entertainingly, veering between disdain and astonishment that a bespectacled little conman brazened it out for so long.”
Carol Midgley, The Times

“It was a high-stakes tale of deception and desire. A ripping yarn with a moral twist in the tale. Just a shame it was self-indulgently spread over 90 minutes, rather than 60 or 75. It needed less repetition and rambling, more narrative focus and judicious use of the editor’s scissors.”
Michael Hogan, The Telegraph

“Graham Dixon’s fury kept this investigation bubbling, but at 90 minutes it was overlong. The chief characters were too sordid to hold our interest for more than an hour and we were kept waiting too long for the final chapter.”
Christopher Stevens, Daily Mail

“While it took a bit too long for the documentary to get to the forger’s more diabolical decisions, it certainly delivered in flipping the sad tale of an artist into a story of money-grabbing and Nazi collusion. Van Meegeren was brought right into 2019 with this film; a brilliant hour and a half even for art dunces like me.”
Emily Baker, The i

Catching Britain’s Killers: The Crimes That Changed Us, BBC2

“The tone here was just right. It wasn’t gratuitous, focusing mostly on the science that revolutionised crime detection, interwoven with archive footage and interviews with experts. But it didn’t forget the victims either, including respectful interviews with close friends and relatives.”
Carol Midgley, The Times

“I’ve mentioned before how I strongly believe there’s far too much true crime on TV nowadays. However, this film was far classier than most, focusing on police procedures rather than crime sensationalism, and placing the case firmly in its historical and scientific context.”
Michael Hogan, The Telegraph

“Catching Britain’s Killers needed to recount the essential facts, but it was a clunking mistake to spend the first 40 minutes going over such well-trodden ground. No mention was made either of vital evidence that has been lost from the police archives over the years, in unsolved cases that might have been cracked if detectives had held on to blood samples or items of clothing. The result was a trite and uncritical programme that told us nothing new and skimped on important background.”
Christopher Stevens, Daily Mail

“Unfortunately it was stripped of scandal almost to the point of boredom. Retelling the story of two murders that happened in 80s Leicestershire meant the documentary had to rely on a mix of archive footage and talking heads, which – after an entire hour – can become a little repetitive.”
Emily Baker, The i

“Everything about this is far from ordinary. The guest judges and mentors are truly impressive. It makes older talent shows look outdated beyond repair, as if they are still on the hunt for Britain’s Next Vaudeville Superstar. Viewers may not be able to vote for their favourites to stay, but this reinvention of the talent show wheel is so convincing I am happy to take such decisions as simply signs of the future.”
Rebecca Nicholson, The Guardian