“Warship is just like every other documentary about the navy you have ever seen.” 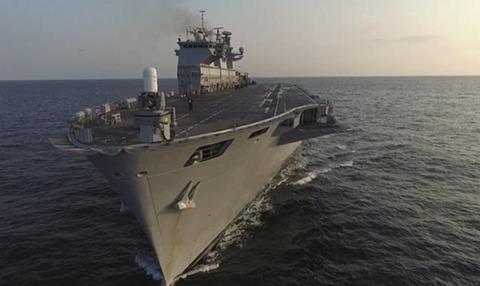 “With the sort of exciting title that suggests destruction and disaster at every turn, Warship filled me with high hopes. Unfortunately, Channel 4’s new series is rather dull. This was an earnest hour of television tailor-made for army and navy enthusiasts. But Warship failed to show the humanity, or humour, behind the scenes.”
Daisy Wyatt, The i

“Warship is just like every other documentary about the navy you have ever seen. My father used to tell me that war entails long, long periods of boredom interspersed with a few intense moments of excitement and terror. It was a balance that Warship managed – perhaps not intentionally – to capture perfectly.”
John Crace, The Guardian

“For anyone who doubts that Britain’s defence spending has hit critical new lows, Warship was an education. Watching the Royal Navy’s flagship Ocean limp along the Med was like following a brave but ancient VW camper van wheezing down the M5 on a Bank Holiday.”
Christopher Stevens, Daily Mail

“Fascinating as it was to watch, it wasn’t exactly the image of naval power one might wish for when we’re about to go it alone again in the post-Brexit era. Still, as a fact-packed film about an enclosed community of almost a thousand men and women, Warship had its moments.”
Gerard O’Donovan, The Telegraph

“Devon and Cornwall Cops promised an insight into the stresses of policing coastal and rural areas as well as inner-city crime. Only the film-makers either couldn’t find any inner-city crime – or decided it wasn’t photogenic enough, and chose to concentrate on as many photogenic areas as they could find.”
John Crace, The Guardian

“The half-hour new docusoap precedes Broadchurch like some corrective from the area’s tourist board. It’s quite a respite to chance upon a crime series where the most sinister transgression is an old major’s memento grenade.”
James Jackson, The Times

“There’s a magical appeal to the Giraffe Manor in Nairobi’s suburbs. This made for ten minutes of adorable TV. After that, Giles Coren and co-host Monica Galetti were pretty much out of ideas, and so they padded out the rest of the show with filler.”
Christopher Stevens, Daily Mail

“There were forays into the wilderness with various local tribes but the giraffes overshadowed everything. This programme was clearly not meant as an advertisement but it didn’t half make me want to have a stay.”
Virginia Blackburn, Daily Express