“Personal, often painful, and with just the right amount of sensationalism, this was a superb documentary” 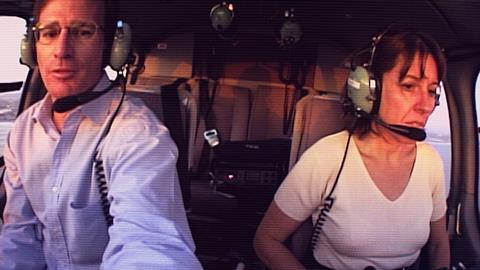 “Whatever you thought about last night’s Storyville, Whirlybird: Live Above LA — and, my, it was quite a journey — I’m sure we all agree on this. There has never been a documentary like it and there almost certainly won’t be again.”
Carol Midgley, The Times

“Some of the scenes they caught on film – riots, gang shootings, plane crashes, drug busts – were shocking to see in this context, let alone on the news. It’s exactly that shock factor that keeps us hooked to rolling news and it was no different for Whirlybird; although the footage was old, I still couldn’t peel my eyes away. Personal, often painful, and with just the right amount of sensationalism, this was a superb documentary.”
Emily Baker, The i

“I found the early years to be the most engrossing, as the couple built up Los Angeles News Service, because Bob was such a charismatic presence: a Clark Kent lookalike who lived and breathed breaking news. Matt Yoka’s film made great use of footage from the couple’s archive.”
Anita Singh, The Telegraph

“Whirlybird: Live Above LA sets out to be many things. If the film-maker Matt Yoka does not quite pull off all of these efforts his ambition remains commendable and his containment of the huge mass of material means there is still plenty of meat on all the bones. You might well wish Yoka could have drilled down into many of the issues, but nothing can cover everything. To be left in such an open, questioning, questing state is the sign of a fine documentary.”
Lucy Mangan, The Guardian

“The featured couples recorded their own video diaries, and kept Willis updated via Zoom. Watching a presenter watching TV can be deadening, but Willis is such an empathetic presence that it worked. There is also a wonderful calmness to her. If I had another baby tomorrow, I’d quite like her to guide me through it.”
Anita Singh, The Telegraph

“Perhaps lockdown is getting to me, but Emma Willis: Delivering Babies in 2020 tugged at my usually steadfast heartstrings. The new format allowed for more intimacy, with the homemade films capturing a more personal and private birthing experience than a film crew of strangers ever could.”
Emily Baker, The i