“The scale of the drama’s ambition is laudable, especially given the absence of Netflix megabucks” 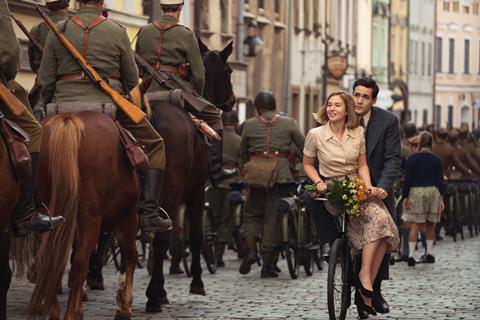 “There is plenty of action, for those who want it, but this is far from the standard wartime miniseries. It is a beautifully turned ensemble piece, with everyone getting their time in the spotlight. It manages to maintain a great intimacy with them all, while building outwards to give a sense of the global scale of events.”
Lucy Mangan, The Guardian

“The scriptwriter Peter Bowker paints the story of the war in Europe onto the broadest imaginable canvas. The scale of the drama’s ambition is laudable, especially given the absence of Netflix megabucks.”
Jasper Rees, The Telegraph

“Bowker has set himself a gigantic, sprawling job providing a multifaceted view of the Second World War via ordinary families in France, England, Poland and Germany, which is possibly why this opener sometimes felt a little diffused and underpowered. But he is a fine writer and now the stage is set I have faith that this won’t be just another Second World War saga.”
Carol Midgley, The Times

“While this was an ideal, cosy Sunday night watch with beautiful costumes and a soundtrack of 1930s jazz standards, it was no paint-by-numbers, predictable re-telling of history. The writing was witty, the characters spoke like real people, and the tear-jerking moments weren’t where you expected.”
Kasia Delgado, The i

“World on Fire has so far failed to evoke effortless panache, but the opener in this sweeping seven-part tale was solid and engaging. Bowker is best-known for The A Word, a family drama with deeply believable characters, and the real attraction of his war story promises to be the depth of its psychological portraits, rather than the breadth of its historical vision.”
Christopher Stevens, Daily Mail

“Deja vu was a major component of Egypt’s Lost Pyramid but that was because the archaeologists kept telling us the same small smattering of facts. There wasn’t much to this diary of a dig, mostly because grave robbers had got to the tomb long before the cameras.”
Christopher Stevens, Daily Mail