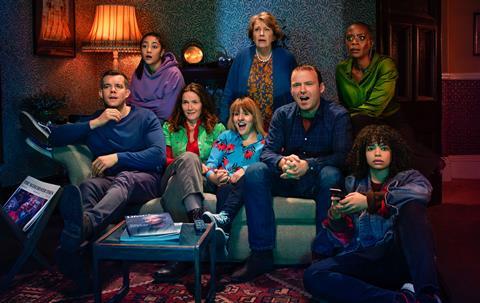 “Russell T Davies seems to capture the zeitgeist effortlessly – fear and uncertainty hover over all the characters and you can sense their inner gimbals ceaselessly recalibrating, like ours, in search of a stability that never comes. But the day-to-day minutiae of life go on as they must – and he aerates the heaviest, most fraught issues with wit and optimism, so that they are no longer a burden, to us or the narrative, but grist to the mental and dramatic mill.”
Lucy Mangan, The Guardian

“Inspired by the current national meltdown, Davies’s anxious vision of an ideological civil war won’t necessarily be for those from the other side of the aisle. But he has not lost the knack for creating fleshy drama with a beating heart that thinks big urgent thoughts.”
Jasper Rees, The Telegraph

“Life with the Lyons is like an exploded diagram of technological trends and the changing face of British ‘identity’. There’s plenty to think about here, but so far I’m not convinced it’s great drama.”
Adam Sweeting, The i

“Issue after issue cascaded out of the screen. It was like being at a brainstorming meeting for the next series of Black Mirror. Superb actors were reduced to ciphers, spouting the neatest of lines. Positives? Loads of them, too many to mention. But this drama is so overstuffed that it’s bursting at the seams.”
Carol Midgley, The Times

“Even amid the gathering mushroom clouds, the whole programme had a smug glow. All the world’s problems were caused by people who were insufficiently right-on or virtuously Leftie.”
Christopher Stevens, Daily Mail

“Tim Crouch and Toby Jones’s ‘sitcom’ has been pitch-perfect. Last night was no exception, from the primary school brass band puffing away tunelessly at the graves of unnamed refugees to the hopeless romance between Pete (Jones) and Fran (Claire Rushbrook).”
Carol Midgley, The Times