“I was literally propping up my eyelids at the merest thought of watching Professor Jon Henderson and his hunky team.” Read on for the verdict on the weekend’s TV. 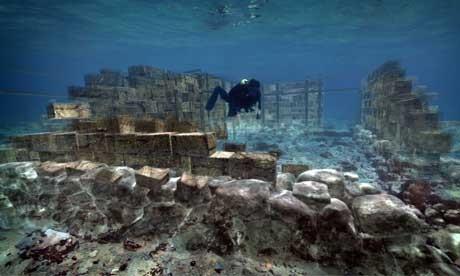 “And very good it was, too, if underwater archaeology is your thing. It’s not, I should say, mine, which makes the programme rather hard to review since I was literally propping up my eyelids at the merest thought of watching Professor Jon Henderson and his hunky team from Australia dust off a few stones on the sea floor.”
Alice-Azania Jarvis, The Independent

“It’s always a treat when archaeology offers us something that actually looks like the thing it used to be instead of a pile of broken rocks in a pit.”
Matt Baylis, Daily Express

“It was, I think, the best episode yet: with slang and swearwords on the menu, it included the rather delightful sight of Stephen Fry, elbow-deep in a tank of water, chanting the word “fuck” in a state of frenzied distress.”
Alice-Azania Jarvis, The Independent

“[Gary] Barlow’s common sense, added to him not being Simon Cowell, brings proportion to The X Factor and, indeed, to showbusiness.”
Andrew Billen, The Times

FIGHTING ON THE FRONTLINE, CHANNEL 4, SUNDAY

“More than any other I’ve seen, it shows what it’s actually like there – from the point of view of the soldiers, not the TV people. So respect to the TV people involved, both for gaining the trust of the squaddies and then for taking a back seat.”
Sam Wollaston, The Guardian