“The interview that told us more than we perhaps wanted to know about Lord Webber’s post-prostate sex life.” Read on for the verdict on last night’s TV. 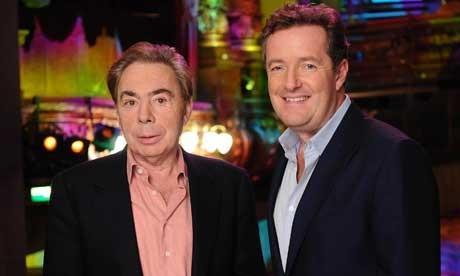 “He [Piers Morgan] interviews one of his celebrity chums and, through abject fawning and intrusive questioning, makes them seem marginally less unpleasant than he is.”
Tim Dowling, The Guardian

“This is the interview that told us more than we perhaps wanted to know about Lord Webber’s post-prostate sex life, but the best bit to my mind was the moment when Morgan, emboldened by white wine, pressed Webber’s wife, Madeleine, to confirm Wife Number Two’s indiscreet testimonial to the size of the composer’s manhood.”
Tom Sutcliffe, The Independent

“His [Morgan’s]  still-more-heavily edited ITV work tends to be better, but suffers from the same oversell. Lloyd Webber, he bizarrely claimed on the programme, was “the most successful composer in the history of planet Earth”.
Andrew Billen, The Times

“If it had been Louis Theroux you’d suspect he was pretending but throughout this film the motive was less to take the mickey and more to rub out the borders between belief and truth.”

“The whole thing was pleasingly confusing, like a poorly but poetically translated novel.”

“Boyd was investigating a case of missing homeless boys, all tied up with guilt over his own dead son. If the Government wants more cuts I can suggest a name.”

“Drawing on three decades’ worth of old Horizon footage, this engrossing documentary took us straight back to an era of astronauts called Hoot, Story and Pinky, when the sci-fi fantasy of a “space plane” promised to make space travel routine.”
Tim Dowling, The Guardian

“Among other things, perhaps, zombie movies are a memento mori for an age that generally prefers to sweep death under the carpet, as well as a reminder that there might be worse things than death. And if that’s what you’re looking for as you gear up for another working week, The Walking Dead does it pretty stylishly.”
Tom Sutcliffe, The Independent

“The Parisian police’s equivalent of Sarah Lund, Laure Berthaud, is so low that she no longer has anywhere to sleep let alone anyone to sleep with.”
Andrew Billen, The Times