“If Gervais is guilty of anything here it’s not cynical exploitation, but self-regarding naivety.” Read on for the verdict on last night’s TV. 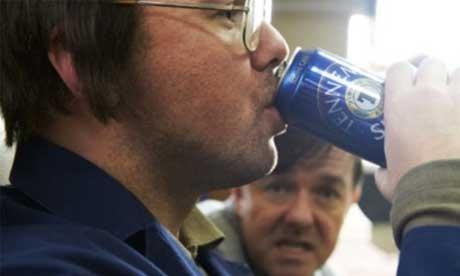 “It wasn’t very funny. It took a while to put your finger on it but, ultimately, there’s just something a little creepy about seeing actors trying to recreate the candid fly-on-the-wall grief that comes with, say, the death of a nice old lady. And too often the gags, when they came, were straight lazy.”
Ben Machell, The Times

“If Gervais is guilty of anything here it’s not cynical exploitation, but self-regarding naivety. If you were feeling very kind indeed, you might want to give Gervais credit for trying. But I don’t think you’d conclude that he succeeded.”
Tom Sutcliffe, The Independent

“The whole mockumentary thing feels tired now. There’s a lack of confidence about it too. Most of all, though, I’m not feeling the character – I’m neither moved nor amused by him.”
Sam Wollaston, The Guardian

“The drama wasn’t in the suspense. Instead, it was in the great, gradual swell of four ordinary people’s guilt, hopes, fears and faint memories all sloshing together. These finales were brutal and sort of beautiful.”
Ben Machell, The Times

“It’s all done sensitively, sensibly, gently. The moment, when it comes, is incredibly moving. It’s so moving because it’s real, and it’s about separation and hurt, guilt and regret, growing up, identity, belonging, family, love, life.”
Sam Wollaston, The Guardian

“The remaining hour wasn’t very funny nor did it, in the manner of most BBC4 programmes, attempt to tell us anything sensible about shifting cultural trends along the way.”
Matt Baylis, Daily Express

“One of the twists worked very well. Other aspects of the finale failed to excite. Final verdict on White Heat? Quite weak.”
Matt Baylis, Daily Express