“I’m far from convinced that there will be enough going on here to keep us interested.” Read on for the verdict on last night’s TV. 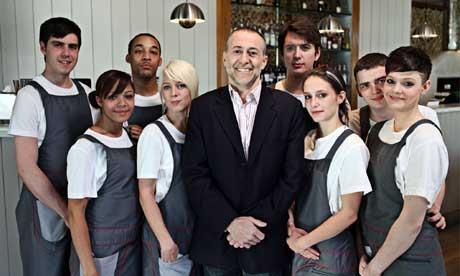 “The idea of this reality show is that after learning the trade in cafés, high-street chains and finally atop the Hilton’s Windows restaurant, two of them end up with “life-changing” scholarships in, well, waiting.”
Andrew Billen, The Times

“I’m far from convinced that there will be enough going on here to keep us interested, not least because the opportunities for catastrophe are dully predictable.”
Tom Sutcliffe, The Independent

“The programme adopted the well-tested format of building up character narratives – Nikkita, the insecure single mum, Ashley, the stroppy 20-year-old with an asbo and no job, etc – you couldn’t escape the fact that it was all fairly boring.”
John Crace, The Guardian

“This show has a basic good-hearted sort of honesty, radiating not least from Roux.”
Matt Bayliss, The Express

“This was DCI Tom Barnaby’s penultimate episode, and it is too late to slap a conservation order on John Nettles who has already swanned off to Serious Theatre, where he recently played in Hamlet.”

May the Best House Win, ITV1

“Format-fatigue is also conspicuously evident in May the Best House Win, a shameless Come Dine with Me clone that mystifyingly purges the set-up of nearly every element of tension and excitement.”
Tom Sutcliffe, The Independent

“What we got here was less Arthur’s journey to the heart of fish darkness and more his insatiable desire to prove he wasn’t a metropolitan wuss.”
John Crace, The Guardian