“The subject is a really important one; I’m just not convinced they’ve got the right person to take it on.” Read on for the verdict on ther weekend’s TV. 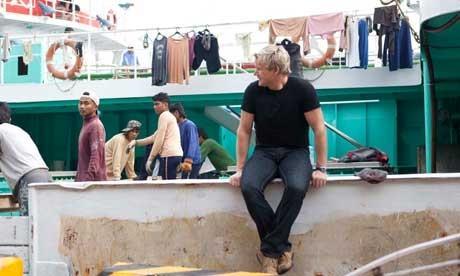 “The subject is a really important one; I’m just not convinced they’ve got the right person to take it on.”
Sam Wollaston, The Guardian

“Ramsay’s arguments were a little muddled. At some points, it was the waste he harped on about, as if it would be fine to kill this many sharks as long as we ate every bit of them.”
Tom Sutcliffe, The Independent

“In his mission to uncover the dark side of the global shark fin trade Ramsay seemed to see darkness where there was none.”
Matt Baylis, The Express

“It is like daytime television that somehow slipped into the evening. I wouldn’t mind ironing to it, but it’s not something that requires your full attention.”
Sam Wollaston, The Guardian

“The saving grace here is that one of the comedians (the presenter one) is Bill Bailey. Not only can he play his own signature tune but he’s got a manner that somehow makes the format work, which is handy for Channel 4, since it’s on every night this week.”
Tom Sutcliffe, The Independent

“I like this series more with every season, and it is still only its third. Its genius is to take Hammer’s old equation of sex with horror and hype the sex.”
Andrew Billen, The Times

“Last night’s dose of the syrupy nostalgia-fest had the locals getting into a lather over a poetry competition.”
Matt Baylis, The Express