“Tennant was like a startled hare who was stunned to realise he had never forgotten his old love.” Read on for the verdict on last night’s TV. 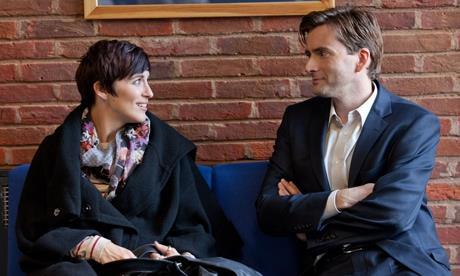 “A very poor advertisement for improvisation, which a lot of it is. Quick, bring back the script. Because coupled with a soppy soul soundtrack this all feels a bit like Our Tune. Remember, Simon Bates? It’s bland. Unmoving. In. Sip. Id.”
Sam Wollaston, The Guardian

“The piece had the raw throb of a picked scab, as his characters stalked around Margate. All of them due to the rekindled affair, like elephants with sore heads hiding from the skin of suburban sensibles.”
Alex Hardy, The Times

“It was as near to perfect as you are going to get in a half-hour drama. Tennant was like a startled hare who was stunned to realise he had never forgotten his old love and that he had never allowed himself to love his wife quite as much.”
Matt Baylis, The Express

“Savage constructs a scene that consists entirely of two people not saying what is on their mind, and the halting commonplaces of their exchanges only increases the tension. What followed, though, was less subtle, and you’d have to lay at least part of the blame at Savage’s door.
Tom Sutcliffe, The Independent

“This was a very good film, which did everything a recent Channel 4 programme about the Shard didn’t. Alastair Sooke, presenting, has found a nice middle path between brainy and accessible. Alastair does art in a way that’s not too arty-farty. Plus he talks to all the right people (“more bloody access!”) without kowtowing too much.”
Sam Wollaston, The Guardian

Secrets of our Living Planet, BBC2

“Packham wanted us to see the rainforest as we have never before. And he did: not exactly through stunning camerawork, to which we have been already been treated by similar shows, but by flipping the perspective.”
Alex Hardy, The Times

“Naturalist Chris Packham toured the rainforests explaining why these places are so full of different, interdependent species of flora and fauna.”
Matt Baylis, The Express

“It is actually very good, full of local enthusiasm for history and full of the most exciting things a history programme can contain, ancient documents and ancient records. Come in a minute late and you’ll be fine.”
Tom Sutcliffe, The Independent