“I like Sarah Beeny: she’s jolly and fun – an enthusiastic labrador of a presenter.” Read on for the verdict on last night’s TV. 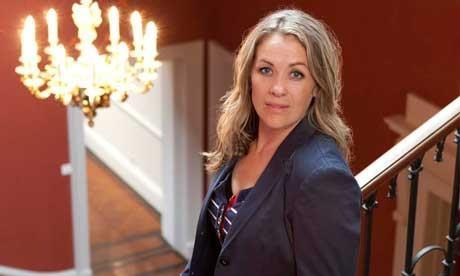 “I like Sarah Beeny: she’s jolly and fun – an enthusiastic labrador of a presenter. And I like stately homes – they’re nice to watch in that escape-from-your-own-grim-life kind of way. But, charming as they both may be, I’m struggling to feel too much sympathy on this.”
Alice-Azania Jarvis, The Independent

“Sarah Beeny, queen of TV property renovation, so used to telling other people what do to, is now putting her own money where her mouth is. Though she won’t say how much money at this stage, which is naughty I think. The reason we’re given is that it is apparently impossible to put a budget on a restoration of this scale – which I guess is OK if you’re minted, which Sarah and husband Graham obviously are.”
Sam Wollaston, The Guardian

“Renovation work is always fun to watch but for the average viewer the business of following a hugely successful TV personality as she does up her 30-bedroom, 40-acre stately home comes with a hefty side order of so what?”
Matt Baylis, The Express

“Like all of those hidden-camera shows (Beadle’s About, Candid Camera) the purpose seems to be less the active seeking out so much as the bland time-passing. Meet the Parents is amusing enough in a nothing-much-else-on kind of way. And that’s sort of it, really.”
Alice-Azania Jarvis, The Independent

The Beauty of Diagrams, BBC4

“The driest sounding offering on last night’s television schedule, and it may well have been the best. Contrary to all expectations, this was no stuffy leaf through biological charts, but in fact a rather romantic romp through the mind of Leonardo da Vinci as he constructed his famous Vitruvian Man.”
Alice-Azania Jarvis, The Independent

Love me, Love my Face, BBC3

“It was well pitched, this film. It didn’t feel like a freak show, as some of them can, nor was it oversentimental. But it didn’t shy away from the issues either. It was just straight-up really, like Jono and Laura.”
Sam Wollaston, The Guardian

“The true redemption in last night’s slightly uninquisitive narrative was to hear Jono speak to kids about kindness and to the parents of a child who, like him, suffered from Treacher Collins syndrome.”
Andrew Billen, The Times

“It sounds as black as night, but Raising Hope is sweet as well as funny. It takes over from where its creator Greg Garcia left off in My Name is Earl in its bid to charm us into the conviction that the lives of white trash Americans may be as trashy as advertised but they are touched by kindness, love and, indeed, hope — all of which are suggested by Raising Hope’s lyrical cinematography.”
Andrew Billen, The Times

“Much of Tudor history is about treaties and religious reforms. Dry stuff to everyone except the experts.  So three cheers to it for digging out one of the jucier bits of the period.”
Matt Baylis, The Express