“It’s funny, sexy, a wee bit rude, and utterly charming.” Read on for the verdict on last night’s TV. 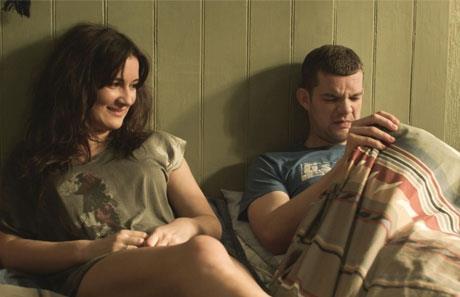 “BBC Three’s most successful sitcom, obeys the sitcom unities that require a sitting room and a sofa, and also the rule-book of young people’s comedy that requires a blow-job joke in the first five minutes.”
Andrew Billen, The Times

“Him & Her rings true, it’s funny, sexy, a wee bit rude, and utterly charming. It may also be the nicest thing on the telly right now.”
Sam Wollaston, The Guardian

“Although this time there were moving pictures to relieve the work of the rostrum camera, the narrative style, emphasised by Peter Coyote’s bar-room baritone voiceover, slowed television down to the pace of intelligent thought.”
Andrew Billen, The Times

“And the essential verdict is that it seems to be harmless – one of those programmes that helps Channel 4 with its public-service remit, but also allows the viewer to squat in a consultation room and gawp at the unwell.”
Tom Sutcliffe, The Independent

“Ruthie Henshall plays the chambers’ harpy in a way that suggests she’s worried about reaching the upper circle, but she’s less conspicuous than she might normally be because everything in The Case is a touch melodramatic.”
Tom Sutcliffe, The Independent

THE MOST COURAGEOUS RAID OF WWII, BBC2

“Proof, in televised form, that ordinary folk will rise to any challenge and some Whitehall pen-pushers will do their best to stuff it up for them.”
Matt Baylis, Daily Express

“That’s odd, because I have lost count of the times I have watched dramas set in the tower block badlands of south or east London, in which a gifted young cast cranks out the same old set of clichés.”
Matt Baylis, Daily Express