“There’s only so much mocking a show can do.” Read on for the verdict on last night’s TV. 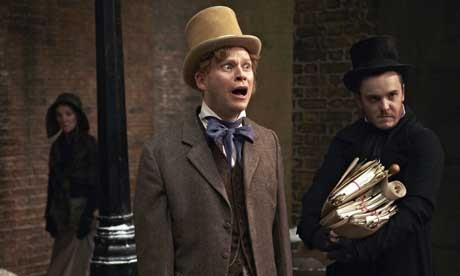 “The script, written by Mark Evans, who has previously penned a Radio 4 “comedy”, Bleak Expectations, had that rare double-edged agility to appeal across generations. It was both cute and clever, so youngsters got an action-filled plot with Jedrington’s children delivering some corking lines, while adults got Dickensian cross-references and literary satire.”
Arifa Akbar, The Independent

“This saccharine, gurning, breathy caper, which is quite modest in its tone, totally inoffensive but just, in the end, not very funny: a perplexing limbo.”
Zoe Williams, The Guardian

“In its way it was a pitch-perfect parody of that frock-coated world world and all its improbable plot lines. However there’s only so much mocking a show can do before it’s time to do something else. After five minutes of people with funny names and jokes about the Duke of Wellington we were seriously wishing something else would start happening.”
Matt Baylis, The Express

“It felt like an attempt by the producers to introduce psychological depth, but it rang hollow, and the programme featured in that subgenre of reality TV that focuses on people who are extreme, obsessive, or pathologised as such, for the purposes of cheap entertainment.”
Arifa Akbar, The Independent

“This portrait of four men who festoon their houses with neon Santas tells a completely different story, which isn’t about Christmas, isn’t about fairy lights, and certainly isn’t about what’s classy and what’s tacky. Most of all, it leaves one with an impressionistic, sideways insight into indulgent parenting.”
Zoe Williams, The Guardian

“It merely followed three different DIY illuminations projects and the assorted fussy, obsessive men behind them. The main motive seemed to be to put on a show, partly for the applause and partly for the sheer pleasure of giving pleasure to others.”
Matt Baylis, The Express