“I felt it was just loving – pleasuring – itself, and I was left to watch, shivering alone at the end of the bed.” Read on for the verdict on last night’s TV. 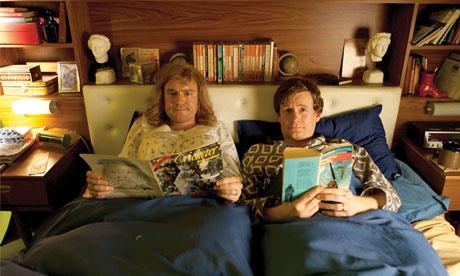 “It could have been as feeble as series four of Monty Python itself. Instead, The Thick of It writer Tony Roche perfectly and often hilariously matched form and content, right down to the bits that didn’t quite work.”
Andrew Billen, The Times

“I wanted to love it, and be loved by it back. But often I felt it was just loving – pleasuring – itself, and I was left to watch, shivering alone at the end of the bed.”
Sam Wollaston, The Guardian

“The performances were all good, but the honours went to Darren Boyd as John Cleese, Charles Edwards as a positively uncanny Michael Palin and Rufus Jones as both Terry Jones and Michael Palin’s anxious wife, constantly wandering into his study in a housecoat and giving him come-hither looks. It wasn’t perfect – the final resolution, with protesters and Pythons reconciling in a BBC green room after Muggeridge and Mervyn Stockwood’s chat-show performance was a little too pat – but by then I liked it too much to really care.”
Tom Sutcliffe, The Independent

“To avoid the Mail’s agenda, Sweeney rightly concentrated on the exploitation of the kids who beg from morning to late at night and urinate in phone boxes. But the Romanies are close knit and dogged attempts to do so, he failed to infiltrate them.”
Andrew Billen, The Times

“More tongue in cheek travelogue than stand-up routine on location, it might not have convinced anyone to try curising but it will have won more fans for Merton.”
Matt Baylis, The Express