“It is a highly entertaining destination and we are blessed with two wonderful leads.” Read on for the verdict on last night’s TV. 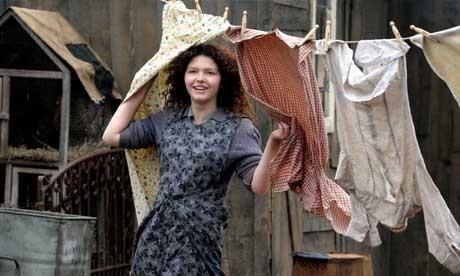 “South Riding seems to combine predictable, Sunday night crowd-pleasing entertainment with something more challenging. Only time will tell which one wins out.”
Matt Baylis, The Daily Express

“But there is more to South Riding than jolly hockey sticks. It’s a subtle story of ideological battle set against a backdrop of social change. Plus there’s the barn action potential.”
Sam Wollaston, The Guardian

“I am told Holtby’s novel is as much Middlemarch as Jane Eyre. If so the adaptor Andrew Davies has pelted towards its inner Brontё, with the detour round D.H. Lawrence. It is a highly entertaining destination and we are blessed with two wonderful leads.”
Andrew Billen, The Times

“It’s one of those dramas in which the arrival of the local vamp is announced on the soundtrack with slinky burlesque notes on a saxophone, almost as if it’s a Tom and Jerry cartoon rather than something for grown-ups.”
Tom Sutcliffe, The Independent

“Given the blandness of the script and uniform ugliness of all the characters, the sad truth is that the blood and screaming are the show’s unique selling points. That, in turn, means tastes haven’t changed much since Tudor times.”
Matt Baylis, The Daily Express

“Andrew Davies would faint at Treme’s lack of narrative pull. Yet it is such a beautiful human montage you are drawn in anyway.”
Andrew Billen, The Times

Shelia Hancock Brushes Up: The Art of Watercolours
Sunday, BBC1

“It’s not demanding – art history for people like me, who know very little. Cutting edge? No. Cosy? Perhaps. But not wishy-washy. I’m watching with a straw hat on.
Sam Wollaston, The Guardian

“So is this a prejudicial omission? I don’t believe so. Kosminsky can’t include everything, and the emotional speech he gives to one Irgun man about liberating concentration camp inmates during the war is proof of his open sympathies. It’s a thankless task, frankly, which is one more good reason to thank him for taking it on.”
Tom Sutcliffe, The Independent

Take Me Out
Saturday, ITV1

“My weekend television guilty pleasure, now that Total Wipeout’s not on? Dating gameshow Take Me Out. It’s a great little formula, the perfect balance between joy and cruelty. I like Paddy McGuinness too, with his cheesy one-liners.”
Sam Wollaston, The Guardian