“A tender, touching, personal story of self- discovery. Brilliant, top drama, well done.” Read on for the verdict on last night’s TV. 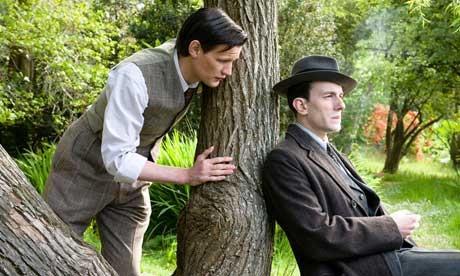 Christopher and His Kind
Saturday, BBC2

“What Christopher and His Kind does do as well as Cabaret did in 1972 is to capture a place and a time. And set against that ominous backdrop is a tender, touching, personal story of self- discovery. Brilliant, top drama, well done.”
Sam Wollaston, The Guardian

“The drama was most effective when it stopped shadowing Cabaret. The scenes of book-burning and pogrom were thin and over-familiar. But whenever Lindsay Duncan appeared, as Christopher’s lethally manipulative mother, the drama acquired a fresh life.”
Tom Sutcliffe, The Independent

“And then there’s the war, a handy emotional backdrop for romance, bravery and tragedy. The BBC’s adaptation of Christopher Isherwood’s autobiography, Christopher and His Kind, contained all these elements, plus an excellent cast and a cracking story. Visually, it was a triumph.”
Sarah Vine, The Times

“What this adaptation needed, if it wasn’t to seem like Cabaret without the tunes, was a fresh take on whatever it was, whether it be Isherwood’s character or the emptiness of the world, that drew the writer to Berlin in the first place.”
Matt Baylis, The Express

“Ferguson’s is a no-nonsense approach: here’s how it is, you better believe it. It’s not especially charming, but it certainly isn’t boring – it’s a a rollicking roller-coaster ride through time, so much fun it doesn’t even feel like school.”
Sam Wollaston, The Guardian

“There’s doubtless much truth in that but this series feels like a cheeseburger version of history. Everything is minced and garnished to be easily digestible but not much like the real thing.”
Matt Baylis, The Express

Wonders of the Universe
Sunday, BBC2

“I have a feeling I didn’t get the remix version of Wonders of the Universe, because the orchestral surge seemed as obtrusive as ever, washing over every grand vista and grand transcendental address.”
Tom Sutcliffe, The Independent