“Unguessable, clever and funny if not necessarily all that believable.” Read on for the verdict on last night’s TV. 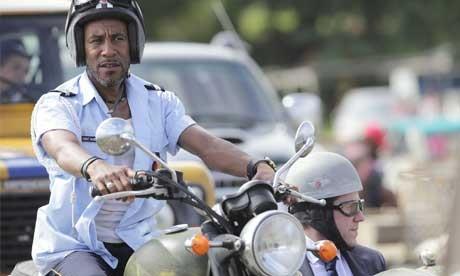 “Unguessable, clever and funny if not necessarily all that believable, it’s just a shame that all the energy seemed to have gone into the story and none was left behind for the characters or the basic set-up.”
Matt Baylis, Daily Express

“It’s neither ambitious nor demanding. Gentle, you’d say if you were being kind. Silly, if you weren’t.”
Sam Wollaston, The Guardian

“But, for as much as it was rather barmy, it was also balmy, capturing the shimmering heat of the Caribbean perfectly, no doubt partly through the local knowledge of the non-Beeb collaborators. It promises to be a warm addition to the winter schedules.”
Alex Hardy, The Times

“What really irritates, though, is the apparent belief that nothing needs to make sense as long as it’s notionally comic.”
Tom Sutcliffe, The Independent

“He tosses a bit of history, sprinkling ‘back in the day,’ a generous dollop of ‘old school.’ Old school is the new pukka; if you took a glug of your beer every time Jamie [Oliver] said ‘old school’ you’d be soon proper tipsy.”
Sam Wollaston, The Guardian

“And he never feels unreal. As he made that pie, he even closed his eyes romantically, authentically, while describing the joys of…sinew. That’s an attraction that some people find as uncomfortable as Titania falling for Bottom, but one that Oliver makes work. Magic.”
Alex Hardy, The Times

“As this clever and sensitive film proved, not without a lot of soul-searching and heartache, it is and also never without private reasons for [becoming a nun].”
Matt Baylis, Daily Express

“James and various other men make a pool table and chase each other across Dartmoor. Lots of fun I imagine. For them.”
Sam Wollaston, The Guardian