“The terrible thing about this kind of comedy… is not that it demeans women but young men.” Read on for the verdict on last night’s TV. 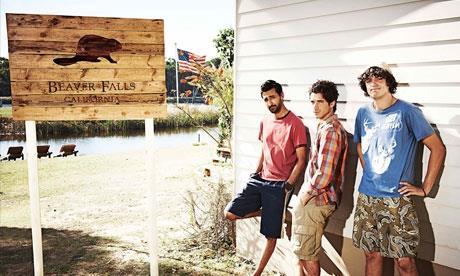 “It is a frankly pretty weird attempt to interpolate our own sensibility into an American combative trope.”
Zoe Williams, The Guardian

“Like The Inbetweeners, it prides itself on its callow plain-speaking…Unlike The Inbetweeners, though, it can’t claim the mitigation of a world viewed through the letterbox of teenage sexual desperation, and that occassionally gives it problems.”
Tom Sutcliffe, The Independent

“The terrible thing about this kind of comedy, which means no real harm, is not that it demeans women but young men.”
Andrew Billen, The Times

“A programme full of excitement and buzz that’s based on the rather less than heart-stopping subject of maths.”
Virginia Blackburn, The Daily Express

“Fans of mathematics…will find they have to wade through a lot of fancy-dress enticement to get at the substantive stuff.”
Tom Sutcliffe, The Independent

“Du Satouy’s paradoxes are so compelling that they could probably have enthralled us in a lecture hall…I’m hooked, and I can barely work out my age.”
Andrew Billen, The Times

“Each script vied to state more of the bleeding obvious than the last.”
Zoe Williams, The Guardian

Home and Away, Channel 5

“When it comes to dramas taking place in hospitals this lot could give Holby City a run for its money.”
Virginia Blackburn, The Daily Express