“Theroux’s film was a study of American consumer culture, with its drive for novelty and its problem with self-denial.” Read on for the verdict on the weekend’s TV. 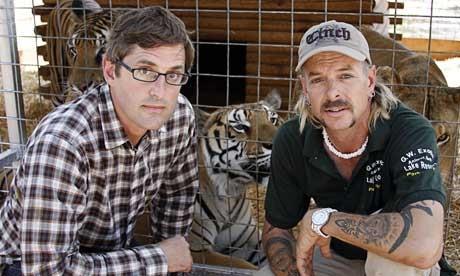 “At the end of the show, you couldn’t help but feel the animals should be freed and the keepers put in the cages.”
David Hayles, The Times

“But there’s the same lingering sadness hanging over Theroux’s film as there was over that one, similar questions about animal welfare, and suspicions that the humans have some kind of issues.”
Sam Wollaston, The Guardian

“Theroux is famous for throwing himself into situations in which he looks like a terrified sixth-former doing a media studies project that has somehow got out of hand. This is all part of his unique charm of course but in this case, hanging out with angry tigers and man-eating chimps, the nerves were 100 per cent genuine.”
Matt Baylis, Daily Express

“In part, Theroux’s film was a study of American consumer culture, with its drive for novelty and its problem with self-denial. These people thought it would be cute to have a tiger cub or a primate pet, so they went ahead and got one, with not a huge amount of thought about the animal’s long-term happiness.”
Tom Sutcliffe, The Independent

“The theme – of rogue cops dodging Internal Affairs to try to nail scumbag criminals by whatever means possible – recalled the US police show The Shield. Last night’s episode featured nudity, violence, and bad language. Again, that was just the cops.”
David Hayles, The Times

“Get involved, even if you’re not big into science-fiction. The superpower stuff is incidental; it’s really about the people, a bunch of kids. They’re totally convincing; they speak and act like kids, their worries and issues are the worries and issues of real kids. So they can change sex and split in two, etc, so what, that’s just by and by. These are characters you begin to care about.”
Sam Wollaston, The Guardian

“Rather than launch into a sermon, [Fiona] Bruce put herself on our side of the camera, looking at da Vinci’s work and inviting the experts to tell us why they rated it so highly.”
Matt Baylis, Daily Express

THE STORY OF FILM: AN ODYSSEY, MORE4

“[Mark] Cousin’s vocal style – a confiding, obsessive croak – takes a bit of getting used to and his approach is unapologetically scholarly. But he really knows and loves his films and the clips are picked with a critic’s eye for the telling detail.”
Tom Sutcliffe, The Independent