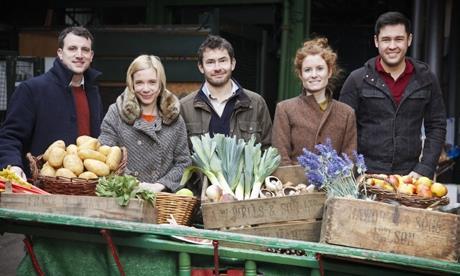 “Someone finally seems to have got Giles Coren’s medication levels right. There was a bit of silly attention seeking in Our Food, but for the most part he was surprisingly bearable.”
Tom Sutcliffe, The Independent

“Our Food was a bit of a ragbag of styles, a sort of Coast on food with funny bits, but not that many funny bits.”
Andrew Billen, The Times

“Yes, I am saying that although it combines just about every current fad in factual television, it is also a little boring. Next.”
Sam Wollaston, The Guardian

“For now at least it’s a toothsome little documentary series taking writer Giles Coren around our isle, exploring the various regions and the edibles found there.”
Matt Baylis, Daily Express

“This was a rather dignified programme, just about able to contain its excitement at its story of how climate change is dislodging from the ice long-entombed mammoths.”
Andrew Billen, The Times

“This little bit of man-made disaster is helping us to understand just what led to the extinction of these hairy elephants all those years ago. That was man again, apparently, eating them.”
Matt Baylis, Daily Express

Kids in the Middle, BBC4

“For the first twenty minutes you were wondering what Hill was keeping from you. But then you found that looking for clues was partly what the film was about. You couldn’t easily stop watching once you’d started either, so skilfully was this commonplace tragedy unfolded.”
Tom Sutcliffe, The Independent

“It’s just a shame, given the subject, that they got this dumb, giggling, groomed-to-the-eyeballs, appearance-obsessed, flicky-haired blonde bimbo on to talk about it.”
Sam Wollaston, The Guardian

“It became obvious that we humans have a sort of in-built desire to destroy things.”
Matt Baylis, Daily Express