“The BBC’s answer to Midsomer Murders – an undemanding, old-fashioned cop drama.” Read on for the verdict on last night’s TV. 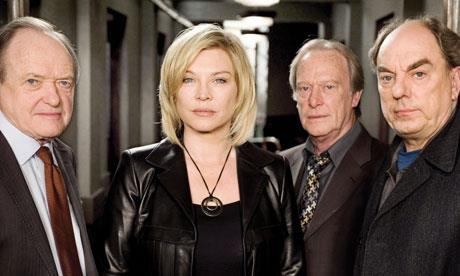 “It doesn’t matter that New Tricks is so cosy. It’s nicely settled in the comfort-blanket corner of the schedules, like an old buddy, the value of whose friendship may have long since stopped questioning.”
Alex Hardy, The Times

‘New Tricks is the BBC’s answer to Midsomer Murders – an undemanding, old-fashioned cop drama that is never going to come with the health warning.’
John Crace, The Guardian

“Sirens is an edgier, funnier, sexier version of Casualty.”
Brian Viner, The Independent

“A comedy drama that is skilfully spanning both genres.”
Alex Hardy, The Times

The Truth About Wildlife, BBC2

“Watching this you could see the future of the British countryside. Birds, insects and flowers on little grant-funded islands and city-sized cereal crops everywhere else. If that’s the truth, I’m unsure whether I want to view the next instalment.”
Matt Baylis, The Express

“Offering us some uncomfortable truths was ‘Landlords from hell: Dispatches’ which made Rising Damp’s Mr Rigsby look like Mother Theresa.”
Matt Baylis, The Express

“It seemed like a vehicle to show some attractive young people half, or rather seven-eighths, naked, and for Perou to show that his brain ticks as quickly as his shutter shuts. On that score, frankly, the jury is still out.”
Brian Viner, The Independent

“The excitement when one of the Oxbridge teams gets knocked out; the wonder of the super-nerd who gets all the answers right; the embarrassment of the contestant who remains silent throughout; and the sheer cheek of Paxo pretending to know the answers to everything.”
John Crace, The Guardian

“It has all the excitement of watching a patient doing occupational therapy.”
John Crace, The Guardian