“Both seemed here to be trying a little bit too hard to be ‘characters’.” Read on for the verdict on last night’s TV. 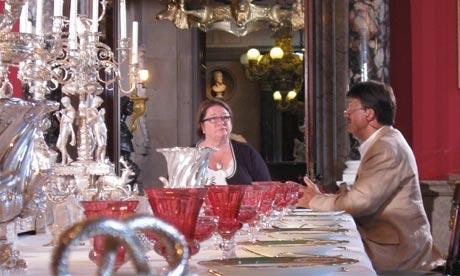 “This is presented by Tim Wonnacott and Rosemary Shrager, one a TV antiques expert, the other a TV chef, who both seemed here to be trying a little bit too hard to be ‘characters’.”
Brian Viner, The Independent

“In the end all one can really do is salute any programme that sustains itself for half an hour on three facts about a stately home, a recipe for pineapple ice-cream and the indefatigable enthusiasm of two presenters who in any other country and in any other circumstances might well be led gently away to sit in a darkened room until a responsible family member turns up to claim them.”
Lucy Mangan, The Guardian

“Apart from showing that some people spent an awful lot of time and money preparing for a royal visit, you can’t help but suspect that it is simply an excuse for the programme’s makers to spend some pleasant time in agreeable stately homes.”
Virginia Blackburn, The Express

“A plot that would have comprised roughly one eighth of the sixth twist in a particularly poor episode in any of the US versions of the L&O franchise… stretched over an hour as languorously as a princess across a Cavendish couch.”
Lucy Mangan, The Guardian

“The programme took too-brief looks at school schemes designed to repair some of the damage done at home and child development guru Penelope Leach asserted that “there are so many things we can do – but we don’t” to manage the work-life balance, but wasn’t given the chance to elaborate.”
Lucy Mangan, The Guardian

“By the end I wondered if this wasn’t just an information programme but a reassurance exercise — if, of course, parents are reassured by knowing that everyone else is having an equally tough time.”
Alex Hardy, The Times

When God Spoke English: the Making of the King James Bible, BBC4

“Hats off to him [Adam Nicholson]  for bringing such colour to what in different hands could have seemed decidedly monochrome.”
Brian Viner, The Independent

“At a time when defence cuts are high on the national agenda, this was a timely reminder that the Royal Navy isn’t just there to protect British interests (although goodness knows that, that’s important enough) but to provide humanitarian aid as well.”
Virginia Blackburn, The Express