“If you’re in the market for a nostalgic soap it should do the trick.” Read on for the verdict on last night’s TV. 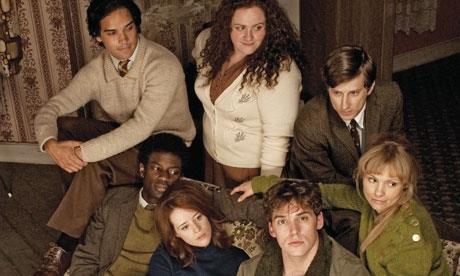 “None of it so far has been surprising. Some of it… has had the distinct reek of cliché to it. Ideally you stop minding because you’re so caught up in the grand sweep of history and personality.”
Matt Baylis, Daily Express

“The story is good and now that we know who’s who, where’s who and in what year, maybe we can enjoy lighter taps from the narrative hammer in forthcoming episodes.”
Lucy Mangan, The Guardian

“John Alexander’s direction is a stylish affair of pensive close-ups and occluded framing that makes it feel a lot less soapy than it actually is. And if you’re in the market for a nostalgic soap it should do the trick.”
Tom Sutcliffe, The Independent

“It has its cast going for it. Against it are patches of anachronistic dialogue. Most off-putting is the way Milne turns her drama into a history lesson, so that the dying Churchill is practically in the cast list.”
Andrew Billen, The Times

“I laughed many, many times. She’s an iron fist in a Marigold glove. The format’s not right yet, but once it is, hopefully television will become Millican’s world and we can live in it.”
Lucy Mangan, The Guardian

“Her delivery is a bit tele-prompter stiff for the straight-to-camera sections and the format is a bit woolly, but she’s funny.”
Tom Sutcliffe, The  Independent

“Millican is a talent who conveys northern propriety even as she discusses her bedroom repertoire, but this show falls between stools more comfortable occupied by Mrs Merton and Harry Hill.”
Andrew Billen, The Times

“Much has been said about public sector pensions in recent years. These folk deserve every last ‘peseta’ of theirs.”
Matt Baylis, Daily Express

“It wasn’t a brilliant documentary. What it was, of course, was a brilliant vehicle for doing what the Comic and Sport Relief team are out to do – alerting and re-alerting us to the almost unfathomable suffering going on around this huge and horrible world.”
Lucy Mangan, The Guardian