Soho pays tribute to former Complete Video owner and chairman Andrew Christie who passed away at his home on Sunday following a battle with cancer. 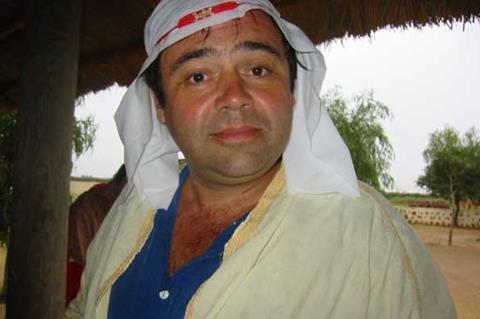 Described by many as the ‘Godfather’ of post-production, Andrew Kingswood Christie worked for and then bought Complete Video before going on to launch a host of facilities companies including the audio and vfx house Scramble and the editing firm Cut and Run which now has offices in London, New York and LA.

He also co-founded Pepper in 1999 with colourist Vince Narduzzo.

He first joined Complete in 1982 as a production manager, left the company in 1987 to join Virgin-owned 625 and then returned to Complete as managing director in 1990.

Christie – along with Hector MacLeod and Godfrey Pye – bought the post house in 1995 and made it part of the Big Finish Group which, at various times over its history, was also the holding company for Pepper, Peach, Men in White Coats and Scramble.

Colleagues and peers alike describe Christie as a generous and kind man, who embraced life to the full.

Famous for his eccentric wardrobe, Christie also appreciated the finer things in life and was an expert in antique Rolex watches amongst other things.

He also loved cars and once drove a Lotus 7 to a trade show in Montreux where he offered free rides to a long queue of exhibition attendees.

Christie leaves a wife, Casey, and two sons. He was 53.

Colourist Vince Narduzzo: “I met Andrew in 1999 through my good friend Dave Pollard. It was after a brief chat that we decided to form a broadcast post-production company - Pepper Post Production, a standalone grading company that grew quickly into a large facility that we know today. Andrew was one of the most generous and colourful characters I have ever had the good fortune to know. He will leave a huge hole in my life as he will many others. Soho will not be the same without him. I owe Andrew so much, my good friend.”

Clockwork Capital’s David Pacey: “Andrew Christie was one of Soho’s best loved and most flamboyant characters. Until recently he could often be seen around Dean Street on his fold up bike wearing his famous long shorts and dazzling shirts. Andrew was best known for his wit and energy and was enormously popular in Soho’s clubs bars and restaurants for entertaining friends and staff alike.

“He was a great friend and a great business partner. He was honest, loyal, caring and immense fun. He could spend endless hours talking about new plans and ventures many of which actually developed and happened.”

The Farm joint managing directors and founders Nicky Sargent and Vikki Dunn: “Andrew Christie was a giant of a man. Despite his terrible clothes, he was dynamically attractive. Despite his business killer instinct, he was fantastically fair. Andrew was, without doubt, the most life embracing and generous man we have ever met. When we left Molinare in 1987, Andrew was the first person to pick up the phone and offer not only money but also a fine lunch; both with no strings attached.

“We benefited tremendously over 20 years from his wit, wisdom, kindness and joke de vivre. We have seen how over the past six months he has borne his hideous illness with spirit and fortitude, helped by his amazing wife Casey and their sons. Andrew adored his family and was a beacon of fun, naughtiness and goodness to his lucky friends. We think Andrew would want us to remember him with a laugh, a cry, an unasked for gesture of kindness and a very large glass of fine wine! We will miss you very much mate.”

Pepper joint managing director Shane Warden: “As the original co-investor in Pepper, it was Andrew who had the firm belief that a successful post house is rooted in its people. When I joined in those early days he made me promise that whatever I did and whoever I employed, that I must always make sure they were “Pepper People”.

“Andrew was an entrepreneur in every sense, unconventional and very colourful – orange trousers, wild braces and dangerously patterned shirts were often his uniform. Frequently seen madly peddling his Brompton bike between Slingsby Place and Soho, Andrew never stood still for long. Always smiling and with a razor sharp but always eloquent wit, time spent with Andrew was always fun. Taken from us all too soon, Soho will be a duller place without him.”

ILab Facilities director John Tadros: “Everyone I know has a story about Andrew. Suffice to say he was a larger than life character and utterly charming. He was a ‘deal maker’ and someone that I both looked up to and competed with on a regular basis. But even in my darkest hours with the failure of M2 he would be the first one to provide guidance and friendship. I will miss him. And I am a hard faced bugger.”

Phil Attfield, former creative director Men in White Coats: “I started working for Andrew in 1993 and over the next seven years I knew the Soho wheeler dealer side of him. In recent years we would run in to each other commuting on the train, and from those brief meetings I glimpsed another facet of the man, which was his love of family.

“I last ran in to Andrew and Casey one journey home in March, and even though he was clearly ill he could still crack a joke. As ever his family were at the centre of his thoughts, but he still managed to offer some business advice to me! When I took my leave of Andrew and Casey that evening they were both smiling, and I felt both humbled and inspired seeing the unbowed spirits of a remarkable couple.”

Optix Digital Pictures’ Brian Shepherd: “Andrew gave me my first job, as a runner way back in 1985 at Complete Video. 25 years on I am now the manager of a post company. I remember his constant finger clicking on both hands as he zoomed around the pink corridors of Complete, I find myself doing it to this day. During a recent phone call with Andrew, I was questioning our company owners poor judgment of character. Wittily and as quick as ever he replied “Clearly, there’s an issue, they’ve employed you”.

“Rubbish jokes, Tartan trousers, Christmas jumpers, taking a nap in a Soho skip after a hard night, a few of AC’s trademarks. I define him as the true shirt sleeve manager, he’d make the tea, empty the bins. Everyone was equal in Andrews eyes, he was the perfect mentor. Thank you Andrew for your sage advice and guidance, you will never be forgotten.”

Peter Shillingford: Andrew was one of the best: generous, amusing, witty and wise…yet another huge gap in everybody’s lives. Casey a tower of strength, the boys both gentlemen, just like their father. He will be sorely missed.