“Television at its most cerebral.” 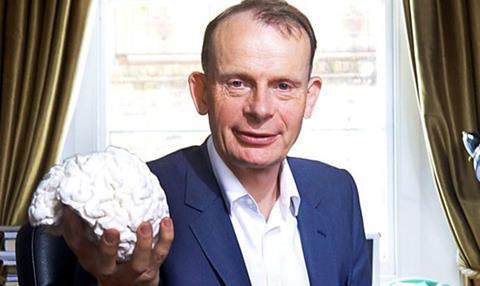 Andrew Marr: My Brain and Me, BBC2

“Andrew Marr: My Brain and Me was a thoroughly serious piece of television. What a rare pleasure to see dab-the-eye reflection eschewed in favour of stoicism and clear-headed enquiry – television, if you like, at its most cerebral.”
Rupert Hawksley, The Telegraph

“His presence on screen, all that enthusiasm and practical curiosity, translates very well to something more personal and I hope he revisits this subject in the future. Except he won’t, because he will already be working on a six-part series about China and two new books.”
Julia Raeside, The Guardian

“As a medical documentary about strokes, Liz Allen’s film had its shortcomings, partly because, as it illustrated with interviews with other victims, they take many forms. It is quite possible, too, that Marr’s stoicism, optimism and resilience made better television.”
Andrew Billen, The Times

“It was the same dogged journalistic quality that he brought to this film as he experimented on himself with radical treatments and interviewed fellow sufferers. The result was as positive as any programme about strokes could be.”
Matt Baylis, Daily Express

“It will be hard for television this year to come up with a better scene than Karen Matthews’s garbled, gasping, bedraggled confession in the closing part of The Moorside.”
Andrew Billen, The Times

“It distilled six weeks of real-life headlines into a couple of hours and delivered a storm of great acting. [But] all the loose ends were bundled away too quickly. Two episodes were not enough to do justice to such a complex, disturbing story.”
Christopher Stevens, Daily Mail

“Rather than point the finger, this episode goes to the heart of her decision to stage a kidnapping. Gemma Whelan’s portrayal of Matthews is masterful in this respect. [This was] a fitting way to sum up the complexity of this superbly-told, harrowing story.”
Rebecca Monks, The i

“What could have been a tongue-in-cheek, mocking documentary goes very easy on the raised eyebrows and portrays instead the individual joy these people experience. It won’t convert anyone to the cause, but it is much more than the sum of its private parts.”
Julia Raeside, The Guardian