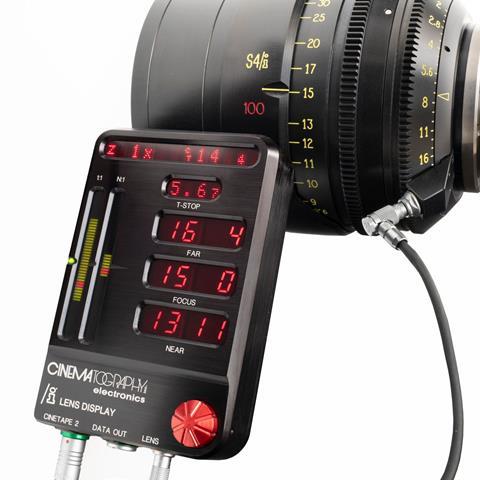 One of the focuses for Cooke Optics for the remaining months of 2020 will be on demonstrating to its customers how its /i technology enables new technical solutions to age old problems. And few problems have been given as much of a twist in recent years as the problem of keeping focus while shooting full frame.

The shallow depth of field look that full frame provides is much prized and has been a significant driver in the rise of productions using the format. However, keeping the narrow plane of focus is a significant challenge on set for cinematographers and focus pullers, especially in situations where both subjects and camera are moving.

The market leading solution for providing a quick visual measurement is the CINETAPE, from Cinematography Electronics, which provides a numerical reading showing the distance between the camera’s film plane and the subject at a glance.  Now in its second iteration, the CINETAPE 2 is smaller and lighter than ever before, and has recently been joined by a dedicated /i Lens Display box that reads critical metadata information from /i technology equipped lenses, and displays the combined data on a multicolored bar graph display for an even quicker depth of field reference.

“The /i Lens Display combines the metadata from the lens, with information from the CINETAPE 2 and displays it in a way that is more user friendly for camera people, for focus pullers, and for those that just don’t want to mess with all of the individual metadata details,” explains Cinematography Electronics’ Larry Barton. “We also have a bar graph that displays whether what they have in focus is right in the middle, at the far end, or at the near end of the depth of field.”

The result is a quick and simple system that helps ensure with a single glance that the focus plane is where it should be, saving time and increasing efficiency on set. It also highlights the many workflows both on set and in post that can leverage /i technology and why it has established itself as the de facto lens metadata system.

“Cinematography Electronics was the first company outside Cooke that worked with /i technology and we are delighted that, close to two decades later, it is still helping push the boundaries,” says Les Zellan, Chairman, Cooke Optics. “Focusing is becoming increasingly critical as more and more people seek to apply the Cooke Look® to full frame work, and this is exactly the sort of clever tool to help cinematographers and focus pullers that was behind the creation of /i technology in the first place.”

Demonstration kits to showcase the CINETAPE 2 and /i Lens Display box in action together are being distributed to the Cooke Optics teams in the field.

Cooke Optics will be exhibiting at MPTS2021 on 12-13 May at London Olympia. Find out more at www.mediaproductionshow.com