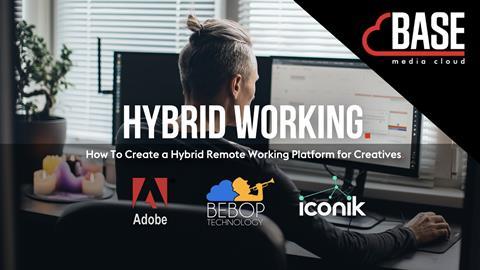 The pandemic panicked much of the post industry into remote workarounds. Now, as vaccine rollouts bring back some normality, companies are grappling with the long-term structure of work and office life.

“The pandemic has drop kicked the industry 5-10 years into the future,” says Niels Stevens, Snr Solutions Consultant Pro Video and Broadcast Workflows, Adobe. “Some companies already moving in the direction of cloud are setting themselves up for a full cloud-based workflow. Others who have made large investments in hardware are having to segue into a hybrid model as they go towards remote.”

These ideas and the technology underpinning them have been spearheaded by BASE Media Cloud since it’s launch in 2015, having been evangelists of cloud-based post production for at least a decade.

“Back around 2010 when I owned and operated a post production facility in London and Pinewood Film Studios, we were talking about how to move editing to the cloud”, comments BASE Media Cloud Founder and Managing Director, Ben Foakes.

“My now CTO (Damon Neale) and I sat on my facility sofa drinking tea, figuring out how we could build out a cloud-based facility using Adobe products for offline and then running high-end finishing workflows on-prem. Fast forward to 2021, and thanks to tech partnerships with BeBop, iconik, IBM and Adobe, we are now able to bring this idea to reality”.

BASE Media Cloud has worked with UK-based post facility and creative agency, Green Rock since the companies were both early stage and has most recently designed a brand new, end-to-end, cloud-based facility for the team at Green Rock.

“Our journey to cloud predated the pandemic,” explains Simon Green, founder and CEO of Green Rock, a production and post production agency based in London and LA. “I had my first conversations about a completely virtual post facility over a decade ago. Distributed collaborative post production is no longer a dream. It is now a reality.”

With clients including ITV, NatWest, Netflix and XPRIZE, Green Rock is among the first UK facilities to transition away from bricks and mortar into a completely cloud-based shop.

“For us, cloud infrastructure means less capital investment in on-premise solutions and a more flexible approach to team working,” Green says. “These issues have magnified in recent months as more and more clients have begun requesting a more agile way of working.

“We are always looking to create the future first and get that advantage for us, and our partners. We are therefore looking to move completely out of our Soho facility and to use cloud to connect clients and colleagues with media and creative tools. It frees us up to scale at a global level like we have only imagined.

“We have major brands and broadcasters keen to work with us because they can see that we are not limited to the physical suites we have on site. We can start to build a facility using cloud resources that enables us to bill and be billed by the hour.”

Green Rock is well on the way to achieving this with technology partner BASE Media Cloud, leveraging an integrated cloud-based platform with SaaS products from Adobe, Bebop and Iconik.

“What we’ve designed together with Green Rock and are rolling out for them will allow their US and UK teams to collaborate remotely via the Iconik cloud MAM,” says Ben Foakes, Founder & Managing Director, BASE Media Cloud. “On prem storage remains for high performance tasks with burst capacity enabled in the cloud.

“There are no longer big fat PC towers under the desk,” Foakes adds. “It will be an entirely virtual workstation environment enabling Green Rock to re-invent its editing strategy.”

BASE Media Cloud acts as the cloud agnostic storage hub into which media applications such as Iconik, with integrations into the Adobe Creative Cloud suite are plugged. Access to application is by simple login secured with multifactor authentication. Remote Workstations are powered by BeBop Technology, running on a choice of public clouds, including AWS, Azure or Google Cloud Platform, depending on the customer’s preference and budget.

“In essence this means your data becomes centralised in the cloud, your workstations run in the cloud but your users can be anywhere in the world,” Foakes says.

Anecdotally it seems that from VFX boutiques to global broadcasters the industry is coming out of the pandemic seeking a more formalised and long-term strategy.

“At the start of COVID, everyone was in a rush,” Foakes says. “The broadcast and post community moved to nomadic working and had to quickly spin up reactive solutions such as using a Virtual Private Networks (VPNs) or running remote desktop or PcoIP sessions. These were temporary solutions because no one really had time to design for it.

Now we’re seeing a huge wave of interest in reducing the size of premises but not moving 100 percent to the cloud. It’s about changing the ratio.”

Post production has evolved. From the days of physical film cutting, into tape-to-tape and the transition at the end of the 1980s into nonlinear file-based editing, now things have gone pure digital.

“The virtual hybrid cloud has arrived as part of the eventual move towards full virtual,” Foakes said.

Click here to view the whole video and demo session.