The collaboration has been marked with a video starring pundits and presenters from both broadcasters.

BBC Sport and Sky Sports have partnered to send a ‘zero tolerance’ message on online hate.

The broadcasters had been running separate campaigns until now, the BBC with Hate Won’t Win and Sky with Hate Won’t Stop Us. The BBC’s campaign has included blocking hundreds of accounts and removing or hiding thousands of abusive messages across its social media accounts. 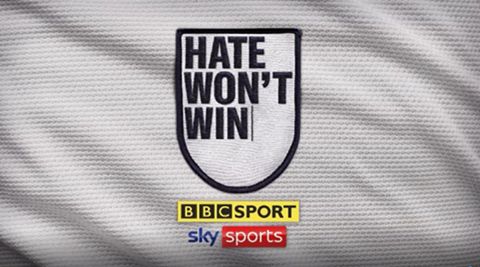 BBC director of sport, Barbara Slater, said: “We are delighted that Sky have joined us in the continuation of Hate Won’t Win to show online abuse is simply unacceptable. By partnering with Sky, we hope to spread the message even further that our social media accounts have a zero tolerance policy towards hateful messages. If we’re on the same team, hate won’t win.”

Sky Sports managing director, Rob Webster, added: “The collective influence of our two organisations coming together is a powerful moment to drive a change in behaviour online and show that hate won’t win. Sky Sports and BBC Sport reach a huge combined audience and our message is loud and clear - enough is enough.”