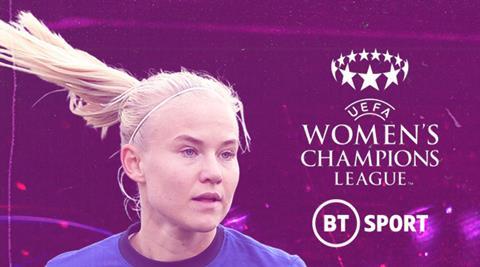 BT Sport is making the UEFA Women’s Champions League Final on 16 May free-to-air across a number of platforms.

This decision comes after Chelsea became the first English side since Arsenal in 2007 to reach the final of the competition.

The Blues will be facing Barcelona in Gothenburg, Sweden, for the trophy, with neither team every having lifted it before. BT Sport’s coverage will begin at 7.15pm for an 8pm kick off, on Sunday, 16 May.

Head of BT Sport, Simon Green, said: “Showing the highly anticipated UEFA Women’s Champions League Final advances our commitment to women’s sport, alongside BT’s partnerships with each of the four UK “Home Nations” Football Associations to inspire girls and women to participate in football. We hope making the game accessible to all without a subscription will encourage new fans to watch and engage with women’s football during this exciting period for the game.”

Chelsea are playing in the final after a dramatic come from behind win against Bayern Munich in the semi-finals. The Londoners lost the first leg 2-1 in Germany, before beating their opponents 4-1 at home.