Rocky and Wrighty: From Brockley To The Big Time will be broadcast live on BT Sport’s YouTube channel on 31 March at 7pm. 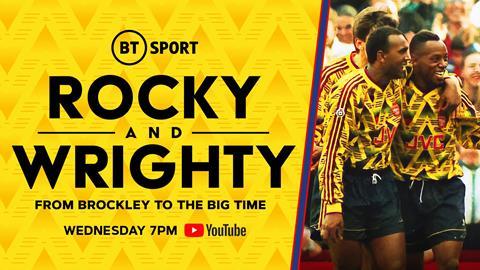 BT Sport is commemorating the 20th anniversary of the death of former Arsenal player David Rocastle with a free stream of documentary Rocky and Wrighty: From Brockley To The Big Time.

Rocky and Wrighty explores the stories of Rocastle and Arsenal teammate Ian Wright, and their journeys from South London’s Honor Oak estate to Highbury and the English top flight. An in-depth look at the similarities and differences in the pair’s histories, with interviews from the likes of George Graham, Steve Coppell, David Dein, the Rocastle family, Pat Rice, Perry Groves, Michael Thomas, Tony Adams and Paul Davis.

A live broadcast of the film will be on BT Sport’s YouTube channel from 7pm tonight, Wednesday 31 March.

31 March marks 20 years since Rocastle passed away from non-Hodgkin’s lymphoma at the age of just 33. In addition to Arsenal, he also played for clubs such as Leeds United, Chelsea, and Manchester City.

You can watch the live stream below from 7pm.