Chelsea are up against Atletico Madrid, while Manchester City face Fiorentina 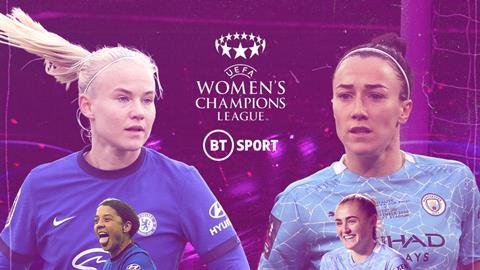 BT Sport will broadcast Chelsea and Manchester City’s Round of 16 ties in the Women’s Champions League this week.

The first legs are on 3 March, with Manchester City’s home clash with Fiorentina starting the action at 16.30. Reigning Super League champions Chelsea then host Atletico Madrid at 19.00, with both games airing on BT Sport 2.

Manchester City is looking to go one better than last season, having been eliminated by Atletico at this stage last year, while Chelsea will be confident against what is now a struggling Atleti.

Both second legs will also be shown on BT Sport, with Chelsea travelling to the Spanish capital on 10 March. City are then playing in Italy on 11 March.

This marks the Women’s Champions League returning to exclusivity on pay-TV, after having been available for free on women’s football streaming service Wnited for the final group stage games.