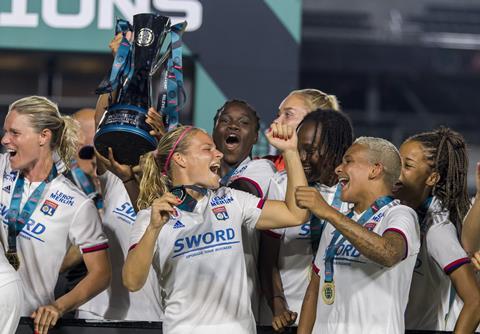 DAZN is to broadcast the Women’s International Champions Cup to over 120 territories, including the UK, this month.

The pre-season competition, featuring top European and US teams in Lyon, Barcelona, Portland Thorns, and Houston Dash, will be shown on both DAZN’s subscription platform and for free on its women’s football YouTube channel.

The WICC aims to crown the world’s best club, with European and US semi-finals before a Europe v US final to decide the champion. It will take place from 18-21 August at Providence Park in Portland, USA. With the time difference, this means early morning kick offs on 19 and 22 August in the UK.

CO-CEO at DAZN Group, James Rushton, said: “We are thrilled to have secured the rights to the Women’s International Champions Cup, which features two of the best teams from the National Women’s Soccer League going up against two fierce rivals from the UEFA Women’s Champions League.

“At DAZN, we are deeply committed to growing women’s football and women’s sport overall by bringing more visibility to elite competitions, such as the WICC, than ever before; that’s why making next week’s tournament available on DAZN as well as on YouTube for free was a no-brainer, to reach even more existing and new fans alike with what’s sure to be two epic days of action.”

The coverage will be available across Europe, North America, Asia, and Africa, and this move comes after DAZN captured the rights to the Women’s Champions League for 2021-25 globally - which it is also making available for free on YouTube.