Euro 2020 highlights to be shown on Piccadilly Lights

Ocean Outdoor has agreed a deal with ITV Sport to show coverage from the quarters, semis, and final. 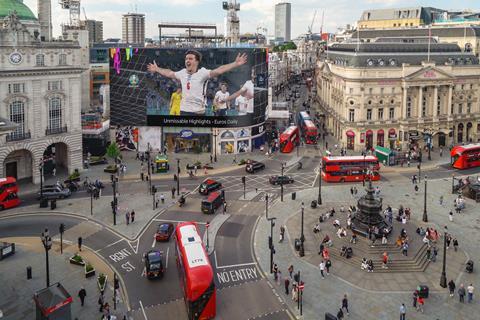 Ocean Outdoor has come to an agreement with ITV Sport to broadcast highlights of Euro 2020 on the Piccadilly Lights.

Coverage of the quarters, semis, and final of the competition will be shown on the advertising boards, on 6/7, 9/10, and 14/15 July. On each of those days, highlights will be aired for ten minutes at 1pm, 5pm, and 8pm.

Included will be England’s 0-4 victory over Ukraine, where goals from Harry Kane, Harry Maguire, and Jordan Henderson fired the Three Lions to the semi-finals. Highlights of the team’s match with Denmark will be shown on the next burst of highlights, 9/10 July, along with Italy v Spain.

Ocean head of content and sponsorship Kevin Henry said: “The Piccadilly Lights is an iconic canvas on which to replay the action and join the euphoria of the Euros. Our ongoing partnership with ITV Sport strengthens Ocean’s credentials as a sports and entertainment broadcast channel, bringing world class sport to outdoor audiences in premium handpicked environments.”

In addition to the football, coverage from Wimbledon is also being shown on the screens in ten-minute bursts until 11 July.