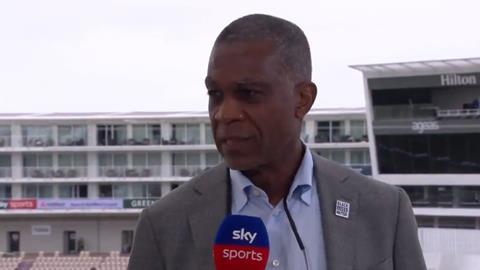 Michael Holding is to retire from cricket commentary.

Appearing on Radio 4’s Desert Island Disks, presenter Lauren Laverne referred to this as the 67-year-old’s, “last year in the commentary box”. There have also been media reports that this will be his last season behind the mike.

Holding is known as one of the best fast bowlers to have played the game, playing 60 Tests and 102 ODIs for the great West Indies side of the 1970s and 1980s. He then moved into commentary after his playing retirement in 1988, becoming known for his forthright analysis and insight.

Alongside the likes of Nasser Hussain, Michael Atherton, and David Lloyd, Holding has since been a regular commentator for Sky Sports.

“Until we educate the entire human race, this thing will not stop.”

More recently, in 2020 Holding made headlines for his call to action on racism while commentating on an England test during the George Floyd protests. He has since written the book Why We Kneel, How We Rise on the subject, featuring conversations with other sporting greats such as Usain Bolt, Thierry Henry, Michael Johnson and Naomi Osaka.