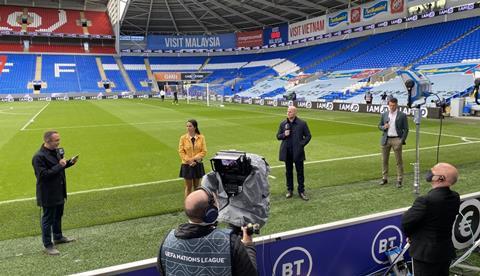 Beginning on 24 March with a away clash against Belgium, the campaign will run until November with matches with other matches against Czech Republic, Belarus and Estonia.

In addition to the competitive fixtures, S4C will also be broadcasting Wales’ friendly with Mexico - which is at the Cardiff City Stadium on Saturday 27 March.

All matches will be shown by Sgorio Rhyngwladol on S4C and S4C Clic.

Dylan Ebenezer, Sgorio presenter, said: “2021 is going to be a massive year for Wales. As well as the small matter of the European Championships, the team will be playing all of their World Cup 2022 qualifying matches.

“Once again, all eight matches have been scheduled within an eight month period, and although it’s a very tough group, the team’s recent performances have given us real hope that we can reach the biggest stage.

“Although there will be no Red Wall following the team for a while, supporters can follow every step of the campaign with Sgorio.”

Sue Butler, S4C sports commissioner, added: “This is an exciting period for the national team in their aim to qualify for the 2022 FIFA World Cup.

“We are delighted to once again to have live coverage of every Wales game on S4C. Let’s hope we can make it through to Qatar.”