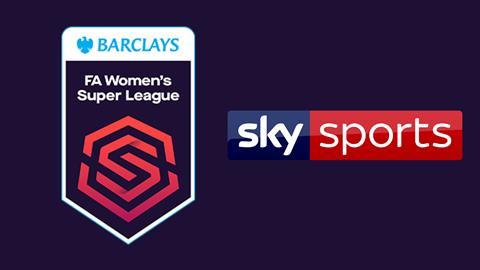 Sky Sports has completed a rights deal with the FA for the Barclays FA Women’s Super League.

The three-year deal, starting with the 2021/22 campaign, means that Sky Sports will broadcast at least 35 Super League games live each season. The broadcaster aims to make the competition one of its flagship offerings, meaning it will get the same treatment as the likes of the Premier League.

Viewers can expect lengthy build-ups and reaction to all live matches, plus daily news from the competition across Sky Sports News and Sky Sports digital platforms. The broadcaster is now beginning a recruitment process for an on and off-screen production team to bring this plan to fruition.

It is the first time that the rights to the Super League have been bought in a commercial deal, with prior agreements focused on growing the sport as much as possible. This time round, in addition to the 35 games on Sky Sports, the BBC will show 22 matches and the remaining fixtures will be available on the FA’s OTT platform, FA Player.

Rob Webster, managaing director of Sky Sports, said: “We are delighted to add the Barclays FA Women’s Super League to our expanding football portfolio. Our goal is to bring our customers more of what they love, and we are certain the WSL will be a success with our football-hungry viewers.

“We look forward to working with The FA and building a close partnership that helps grow the women’s game now and for future generations. With the addition of the Barclays FA Women’s Super League, Sky Sports truly is the home of football.”

FA director of commercial and marketing, Kathryn Swarbrick, added: “This is a multi-million pound commitment from Sky that is going to help push the women’s game on even further and support our ambition of having the best professional women’s sports league in the world.

“Sky’s vision for women’s football is very much aligned with our own, and that was made clear during the tender process where they outlined some very exciting plans for showcasing the Barclays Women’s Super League. We are really looking forward to working with them.”