The Amazon Prime Video docuseries will chart the club’s rise from financial ruin to the Premier League. 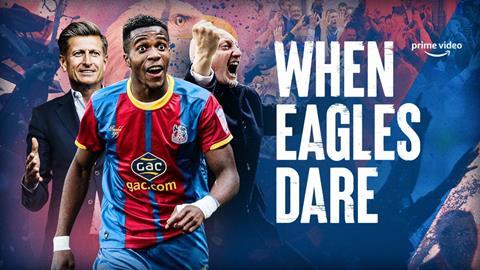 Amazon Prime Video has shared the first trailer for Crystal Palace docuseries When Eagles Dare, which was revealed earlier this month by Broadcast Sport.

When Eagles Dare charts the south east London club’s rise from financial ruin and administration in 2010, through to its miraculous promotion to the Premier League in 2013. Since then, the club has become a top flight regular under the stewardship of manager Roy Hodgson.

This has been quite the turnaround since the club was on the brink of liquidation in 2010, and needed a fan protest and a consortium led by current chairman Steve Parish to stop it from going out of business.

The 50-minute shows will feature never-before-seen footage of the 2012/13 season, as well as retrospective interviews with the main figures from the time such as former managers Dougie Freedman and Ian Holloway, and players Wilfried Zaha, Jonny Williams, Julian Speroni, Mile Jedinak, and Kevin Phillips.

It was created by the club’s in-house production team, Palace TV, directed and edited by Sean Webb, produced by Chris Grierson, and executive produced by James Woodroof.