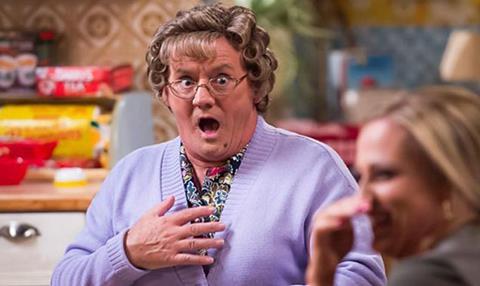 Mrs Brown’s Boys producer BocPix has tied up with Hungry Bear Media for a spin-off of the hit comedy. The six-part order, in which star Brendon O’Carroll will interview celebrities and members of the public, follows a non-TX pilot in September.

ITV will be keeping its fingers crossed that the Irish comedian doesn’t spoil the two-hour semi-final of The Voice UK, which airs from 8.30pm.

O’Carroll’s last outing as Mrs Brown reeled in a whopping 8.8m (43%) for a one-off special in July.

The debut commission for Alison Owen and Debra Hayward’s indie Monumental Television is a costume drama “with its teeth sunk firmly in the modern world”.

The eight-part prostitution drama, which is being co-produced with SVoD service Hulu, will air on the commercial broadcaster’s pay-TV channel – which Kevin Lygo has admitted remains a “work in progress”.

The England footballer opens up about the death of his wife Rebecca after she died of cancer in 2015 in a moving one-off examining grief.

The film, produced by Only The Best, the indie established by former BT Sport exec Grant Best, will provide a counterpoint to ITV’s comedy gameshow Play To The Whistle, which has been struggling in its Tuesday evening slot.