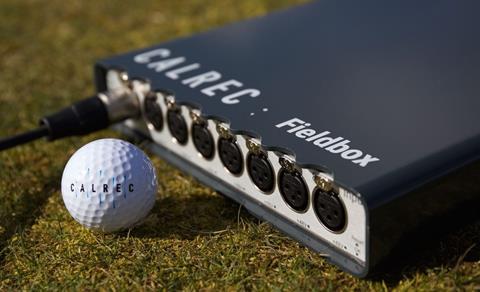 DiGiCo consoles can now integrate onto the Hydra2 network via DiGiCo’s new ‘anything in, anything out’ Orange Box, equipped with Calrec’s new Hydra2 interface card.

The Orange Box takes a variety of DiGiCo Multichannel Interface (DMI) cards that easily convert audio from one transport protocol to another.

Calrec has developed an interface card that allows third-party manufacturers to integrate Hyrda2 into their equipment. In this instance, the Calrec card sits on DiGiCo’s Hydra2 DMI card in the Orange Box and redundantly connects into a Hydra2 router via fibre or copper like any other Hydra2 I/O connection. A MADI DMI card also sits in the Orange Box, which in turn connects to any DiGiCo console.

The dual MADI connection allows 112 channels of audio to pass from the Hydra2 network.

The link provides the ability to share labelling and control input gain along with I/O switching for phantom power and phase.

Calrec also used NAB to announce two compact aluminium expansion units that can be used to expand and distribute a Hydra2 network.

The new Fieldbox range of small-format I/O units brings the advantages of Calrec’s Hydra2 stagebox to rugged environments and areas where rack space is at a premium.

Calrec said the 1U half-rack units were ideally suited for work in outside broadcast environments where I/O need to be spread over a large area, such as at a golf course.

Fieldboxes can be located and distributed exactly where they are needed using just two high-capacity network cables for full redundancy. This setup allows for significant savings on rigging time and cabling costs, and it also reduces cable storage and transport.

The units can be powered  by an AC feed, but also by an industry-standard battery pack. Minimising the distance that analogue cable mic level signals are carried reduces the noise and interference picked up, improving overall audio performance.

A single connection from the router can then be switched via the H2Hub to multiple I/O units, or to multiple H2Hubs if further I/O distribution is required. The H2Hub’s connection and distribution options make them ideal for forming ad hoc networks, especially when combined with Fieldboxes and other Calrec I/O infrastructure.