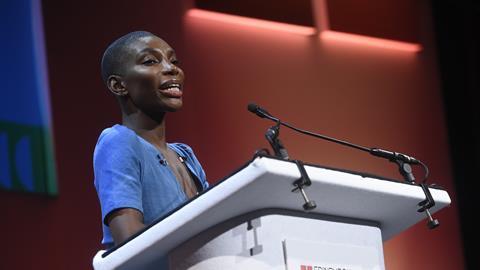 The TV industry has been challenged to smash its stifling homogeny after Michaela Coel’s powerful MacTaggart lecture set the tone for the Edinburgh International Television Festival.

Speaking to a packed room of more than 2,000 delegates, the Chewing Gum creator urged producers to trust outsider talent, dubbed “misfits”, rather than stifle their creativity by asking them to conform.

And she was critical of the creative, pastoral and moral support she has received throughout her TV career, especially after she was sexually assaulted while writing the second series of the E4 comedy.

“I’m going to try to be my best. To be transparent, and to play whatever part I can, to help fix this house”
Michaela Coel, actress and writer

Coel said she is committed to mending TV’s “faulty house” and challenged the rest of the industry to do the same. “I’m going to try to be my best. To be transparent, and to play whatever part I can to help fix this house. What part will you play?”

The plea, issued by the first BAME individual and only the fifth woman to deliver the MacTaggart in its 42-year history, struck a chord.

Comedy icon and Baby Cow co-founder Steve Coogan warned of writers having their distinctiveness “hammered out of them” during the production process as execs seek to deliver “viable” programmes.

“It’s about navigating those waters so you get something authentic with a real voice intact,” said Coogan. “Sometimes the balance is wrong because people lose their edge and become too media-friendly, or they become so esoteric that they never quite get through.”

During the Question Time debate at the end of the festival, C4 deputy director of programmes Kelly Webb-Lamb acknowledged the dominance of “mediocre, posh, white people” in TV.

“We have to understand that if we want to be properly creative as an industry, we need to make room for different perspectives,” she said.

Webb-Lamb, who is white and holds a philosophy degree, said even she felt pressure to conform when she attended her first creative breakfast with other senior commissioners at C4.

“If I felt I needed to work hard to fit in, what does that mean for others?” she asked.

DCMS Committee chair Damian Collins said the industry’s inclusivity drive will only work if individuals are encouraged to find their own voices.

“What is the point of getting people in from diverse communities if we expect them to behave like all white people?” he said. “There’s a big section who aren’t represented in our creative industries, which means the ideas they hold aren’t represented either.”