…created a Plasticine garden at Chelsea 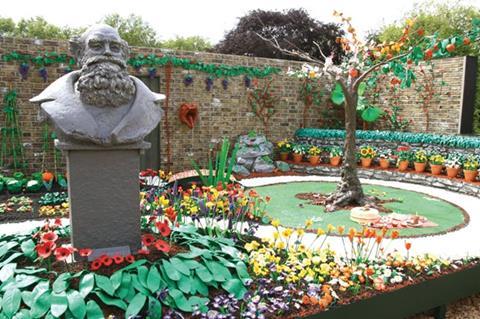 “Can you think of a better way to dumb down what was the world’s finest showcase for horticultural skills than by introducing Plasticine plants?” asked The Times.

It was never meant to end with a newspaper quote like this. It was supposed to be a bit of fun.

Five months ago, the BBC’s Mirella Breda commissioned Plum to make a series in which James May tries to do something huge and ambitious with iconic toys. Soon we would be building a full-size house from 2 million Lego bricks, plus a 30ft Meccano bridge, a mile-long Hornby rail track, the longest Scalextric track ever built and a full-size Airfix Spitfire.

James has torn children away from their computer games and parents away from their TV sets to celebrate the infinite possibilities that these toys can bring, the joy of creating something together, of letting your imagination run wild.

The first episode looks at Plasticine. James and I had the idea of making flowers, which led to the idea of making a garden. Series editor Ian Holt and I sat down with the Royal Horticultural Society last winter, to cheekily ask if we could make a Plasticine garden at this year’s Chelsea Flower Show. And they said yes.

We enlisted a garden designer to help James come up with his design. All we needed then were some flowers. The Ideal Home Exhibition stepped in and gave us an area where hundreds of members of the public made over 2,000 flowers for James. We began to think we might just pull this off.

We still had a tree, a statue, a fountain, bushes and climbers to make. But we began to fill out the garden with the help of (deep breath): Aardman; Jane McAdam Freud (painter Lucien Freud’s daughter), who’d actually trained in Plasticine sculpting; Jane Asher, who made flowers and a Plasticine cake for our picnic area; loads of fantastic art students, some Chelsea Pensioners and the pupils of Stockwell Park High School.

The unveiling was incredible. Amid the show’s pomp and ceremony, we were suddenly the main attraction.

But not everyone approved. We were docked 30% of our marks because we had no real flowers or plants (our response – “but it’s a Plasticine garden” – fell on deaf ears). We won no prizes. But just as James was encouraging the masses to rise up and overthrow the establishment, who had clearly ignored the will of the people, the RHS intervened and presented James with a gold medal. Made out of Plasticine. The revolution will have to wait.