“The boys were likeable, and this was way more fun than those deathly documentaries going behind the scenes of high-end department stores” 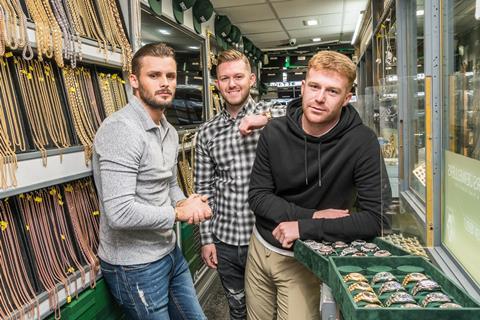 “This was a lively, upbeat documentary, so upbeat it occasionally bordered on the manic, enhanced by an overexcited voiceover by Dani Dyer. It was quintessentially British and rather endearing for it.”
Carol Midgley, The Times

“Like other Channel 4 shows of this type – Tattoo Fixers springs to mind – the customers had clearly been prepped before they walked through the door. But the boys were likeable, and this was way more fun than those deathly documentaries going behind the scenes of high-end department stores.”
Anita Singh, The Telegraph

“Judd, Kallum and Alex were cracking company, naturals in front of the camera, with a roaring trade in one-liners (deliberate or otherwise). Best of all, though, they weren’t afraid to celebrate their successes. You couldn’t help but root for them.”
Rupert Hawksley, The i

“We see a lot of the customers who come through, each showing off their own form of British eccentricity. As a film, though, this can’t contain the big characters within it. It leaves you with the post-junk food feeling, like you’ve eaten, and you’re sort of full, but you’re also nowhere near satisfied.”
Rebecca Nicholson, The Guardian

“One of the major storylines in the last series was Jenny being diagnosed with breast cancer. The show returned last week with the news that she was in remission. Hurrah! That’s done and dusted, let’s move on to the next plot, shall we?”
Anita Singh, The Telegraph

“I like Cold Feet. I like its reassuring quality, sharp dialogue and pleasing interiors aesthetic. But I sense this series is struggling for ideas and energy. It feels slightly like a band on stage who have briefly forgotten the words and are humming as they go along.”
Carol Midgley, The Times

“The sight of these 50-somethings pretending to be schoolchildren makes my skin crawl. Any sane adult’s reaction to that kind of playground name-calling would be baffled hilarity. When Cold Feet began in 1997, there was some justification for these suburban Peter Pans, getting older but never wiser. Almost a quarter of a century on, there’s no excuse for it.”
Christopher Stevens, Daily Mail

“It’s nice to check in on Silent Witness once in a while to make sure that this national treasure is being properly looked after. Twenty-three series in, there are no signs that this crime drama is ready for the morgue.”
Rupert Hawksley, The i