War in the Blood

It’s not every day you’re introduced to someone whose work could cure cancer.

In 2017 I met Martin Pule, a remarkable scientist from University College London, who is at the forefront of pioneering work in CAR T-cell therapy - a treatment seen as the biggest step change in cancer treatment in a generation.

Martin was about to trial in humans a treatment he had developed for leukaemia that had only ever been tried on mice. The patients taking part would be terminally ill and placing their only hopes of survival in him. He and the hospital were brave enough to grant us access to the trial.

Observational documentaries can only be made with consent and are always reliant on strong contributor relationships, but that was particularly the case with this film. We were potentially going to be filming the last months of these patients’ lives and nobody could predict what would happen in this time.

As the treatment carried the risk of life-threatening side effects, we were wary of patients agreeing to filming when they were full of hope and having doubts further down the line if things weren’t going well. We needed to have very frank conversations about all possibilities and give them the space to think it through with their families.

In the end we found two extraordinary men: 52-year-old Graham and 18-year-old Mahmoud. We got to know them over a number of months before the trial started. They put their trust in us and never wavered throughout filming. 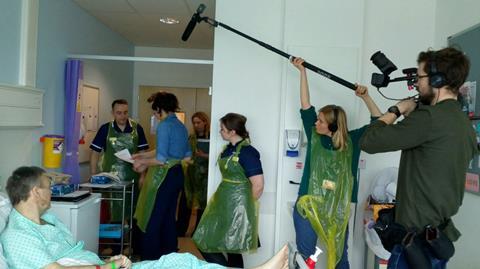 War in the Blood: crew films in the war with patient Graham

There are lots of hospital documentaries on television, but I feel we’ve been able to make something unique. A big part of that was evoking the wonder of science in a way that was compelling and humane but didn’t require a PHD to understand it.

When Martin described how the treatment was produced, and how it worked in the patient’s body, it was incredibly exciting. We wanted to convey this in a way that was fitting for an observational documentary.

We had to get Martin to talk about his work in a way that wasn’t alienating, but we also had to find a soundscape and a visual grammar for the inside of the body. Without going into too much detail, some of the shots involved an endoscope on a motion control arm submerged in a bucket of water with a lamb’s bone marrow - and my blood.

Even though the film is set largely in a hospital, it is essentially a human drama between Martin, Claire (the doctor who was running the trial) and the two patients, Graham and Mahmoud.

The relationship between the clinical team and the patients was fascinating. How much hope was it fair for the team to give the patients when they were effectively going in to the trials as human guinea pigs?

War in the Blood: patient Mahmoud

It was a step into the unknown for everyone. They all had to weigh up hope with realism and I think the response to that question, which is at the heart of the film, is a profound and revealing reflection of the human condition.

We kept the team on the ground small to maintain an intimacy. I self-shot the film and my brilliant producer, Saskia Rusher, did all the booming. The budget didn’t allow for the length of filming period we needed so we balanced it with another film for the BBC about the Holocaust at the same time, allowing us to extend the schedule on both. The Last Survivors was broadcast earlier this year.

One moment makes me shudder. The CAR T-cell treatment is a liquid solution that is cryogenically frozen until it is ready to be administered. On the day of Graham’s infusion, in a cramped room, I filmed it being taken out and thawed in front of him.

As I turned round to get Graham’s reaction, I caught the lens bag attached to my waist on the edge of the table that the treatment was perched. My heart stopped thinking I may have knocked over the treatment, worth £500k and Graham’s last hope of survival.

I hadn’t of course and nobody else noticed but it was a reminder of how high the stakes are and the burden of responsibility on the clinical team every day to cut out any human error.

Arthur Cary: My tricks of the trade