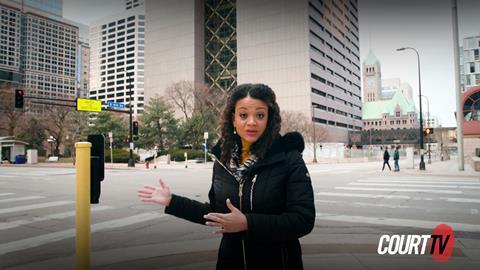 Covering the trial of Derek Chauvin

We knew early on that we wanted to cover this trial: George Floyd’s death sparked a movement and we were aware there would be tremendous interest.

Each of the different US states has its own laws when it comes to cameras in court, and no Minnesota trial had ever been on air before, so we had to build relationships.

Minnesotans had never experienced such media interest at hearings, with journalists overflowing, and when they saw that level of interest, it allowed us to start a really honest conversation about bringing cameras in.

People around the world saw George Floyd die on camera while bystanders pointed out he couldn’t breathe, and those same people want to understand how justice is served

The trial is taking place at Hennepin County Government Centre in Minneapolis, which is the largest courtroom in the county. We first visited in December and the chief judge worked really closely with us on camera placement to make sure they weren’t an obstruction.

There will be three cameras set up inside the court. The first shows the judge and witness, the second gives a different angle of the judge plus the lawyers’ table with prosecution and defence, and the third is on the judge’s bench shooting out the other way. At five inches tall, they are only just larger than a CCTV camera, and are remotely controlled so won’t be a physical or audio distraction. 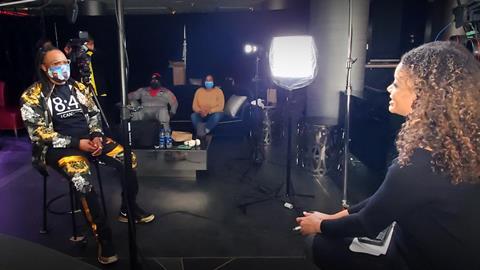 Court TV’s Julia Jenae (right) prepares to exclusively interview Maurice Hall, a man who was with George Floyd on the day of the incident. Image: Court TV.

The jurors will never be filmed and will be told that the judge made a public order to allow cameras in court but the cameras are designed to shoot over them. The jury box has been removed because of Covid precautions and the jurors are spread out with plexiglass in between. We went through a process of moving jurors’ seats to eliminate any risk of them being filmed; we take it very seriously.

The jury is also using a different room for its deliberations because of Covid, so we are using the former jury room as a mini-Court TV production office. The cameras will be controlled from there, with the team shooting remotely.

Usually, we try to have the production team in the courtroom as it’s easier to read body language but Covid means there is a limit on numbers so our senior director of field operations, Grace Wong, will be in the courtroom, communicating with other Court TV staff in the production office and trying to guide them via email when evidence is coming in.

We have set up a media centre across the street for journalists from other outlets to be able to watch the trial on large screens, using our raw feeds from all three cameras. There’s also the switch feed for other media such as the BBC and ITN to use, which can be viewed from the media centre.

We are at the epicentre, serving as pool, which means our footage is shared with other media across the world – local stations and national networks who don’t have the bandwidth to commit to multiple weeks’ coverage. Our goal is to be the front row seat of justice for our viewer but we have a responsibility to the court to ensure they can perform their job without interference.

We were on the ground for a week before jury selection began on 9 March. It usually takes about three weeks to pick a jury and then we enter the ‘guilt phase’ of the trial. We provide coverage every day from 9am-11pm local time, with two legal correspondents on the ground. 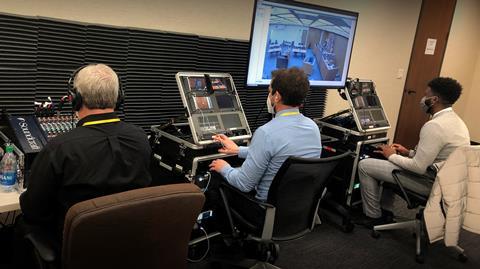 Court TV’s production control area, set up adjacent to the courtroom on the 18th floor of the courthouse. Image: Court TV

Production rehearsals took place before the trial began to try to get all of the elements together and to ensure that our TV signals were working their way across the street to the media centre with any weather impediments. We anticipate an enormous number of media enquiries for this trial, along with companies wanting to access our signal, and we’ve purchased equipment to support that.

There is a team of around 75- 80 people, which is not a massive TV organisation, but they all feel Court TV is a real calling for them. This is the biggest trial we’ve covered since the channel relaunched two years ago but they’re a really experienced team who have overseen huge trials such as that of Harvey Weinstein.

People around the world saw George Floyd die on camera while bystanders pointed out he couldn’t breathe, and those same people want to understand how justice is served. Having cameras in court is so important, in order that viewers can see and hear all the evidence presented to a jury, and subsequently understand the verdict.

’US policing is on trial and we will air every moment’ 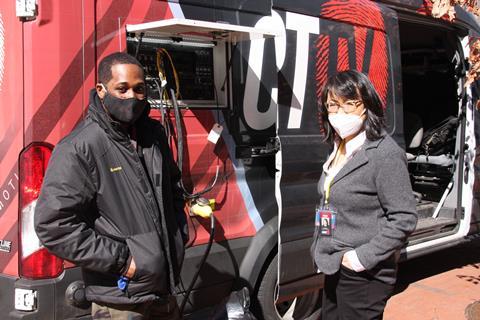 The biggest challenge in this case was to get cameras into the courtroom. I don’t usually get nervous but I had one chance to persuade the judge, and I had to meet with him over Zoom. It was an uphill battle from the start and I knew that tradition and history were against me in this state, as cameras have never been permitted for the guilt phase of a trial in Minnesota. But all it takes is for one judge to agree with you.

I like to think that my experience shows – I’ve encountered many challenges in the courtroom and can anticipate, address and assuage the concerns judges have. I tell them it’s not my first rodeo and remind them that just as there are rules for lawyers to follow, they can impose rules on the media too.

I always try to reassure judges they will still be in charge of their courtroom, which I think is their biggest fear. I understand their purpose is not to provide us with TV, but to make sure the defendant gets their constitutional right to a fair and public trial, and I will work with them to achieve that.

What was very unusual in this case was the vigorous effort by the prosecution to ban cameras. Their argument is that cameras would intimidate the witnesses, but in this case the witnesses are mainly experts who testify in trials all the time. My argument is that these cameras are so small and discreet. I’ve covered hundreds of trials across America and they impose no distraction; people forget they are there.

It was a fight to get access and we won. US policing is on trial and we will air every moment.