Glow Up; Make-up: A Glamorous History; Doctors of War; Shadow and Bone

“It’s joyful, harmless, celebratory fun and there is, as ever, a rightful place for that.” 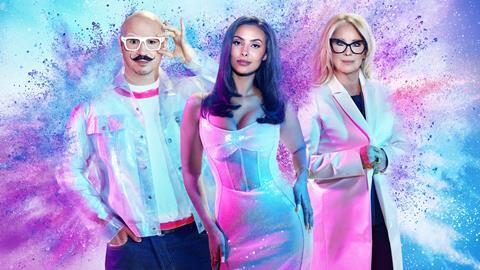 “Complainers will complain that it’s not a rerun of AJP Taylor’s lectures, of course, because they always do. But it’s joyful, harmless, celebratory fun and there is, as ever, a rightful place for that.”
Lucy Mangan, The Guardian

“This knock-out competition is back with a new host, Maya Jama replacing Stacey Dooley. It doesn’t really need a presenter at all, because Maya has little to do except start the clock and call out the times in each round. All the entertainment comes from judges Val Garland and Dominic Skinner, who are savage.”
Christopher Stevens, Daily Mail

“Replacing Stacey Dooley, Maya Jama proves to be the perfect glue for the show: she’s chatty, relatable, a natural on camera and all the contestants seem to have immediately warmed to her. This year’s cohort is impressively diverse and their individual skills vary massively. Credit to the production team for putting the contestants’ pronouns next to their names and normalising that conversation, too.”
Diyora Shadijanova, The i

“Presenter Lisa Eldridge’s clear wish to approach what some may regard as a frivolous subject with appropriate social history seriousness was laudable, even if it occasionally made this hour’s TV rather solemn. Still, the experience of the (mostly female) Georgians who kick-started the series, their faces caked in a form of lead-based whitener that could make you deaf, infertile or dead, didn’t leave much room for the chuckles. This was thoughtful, illuminating TV.”
Ben Dowell, The Times

“Eldridge proves an illuminating guide through the evolution of facial fashion. On screen, she really sells her sensory delight in the products and her curiosity about what they meant to the women of the past. If YouTube has taught us anything it’s that people can’t get enough of cookery and make-up tutorials. This series combines the soothing, alchemical pleasures of both.”
Helen Brown, The Telegraph

“Historian Lisa Eldridge’s glorious survey of beauty treatments in the Georgian era was full of archival snippets to make your hair stand on end. All these historical anecdotes and oddities were made memorable by the clever trick of having Lisa make up a teenage model, Queenie, in the Georgian style throughout the show.”
Christopher Stevens, Daily Mail

“The work of the international staff was extraordinary, patching up senselessness, their work a hymn to common humanity. And while this honest film didn’t seek (or need) to overplay its emotional punches, it was inescapable that the stories of the very young packed the heftiest blows. Not a story or image was wasted.”
Ben Dowell, The Times

“Though it gave a raw glimpse of the war-torn country, the narration and framing felt tinted with white saviour-ism. While Dr Buckles’ skills were undeniably life-saving, an ‘us and them’ narrative emerged in the way he and other doctors talked about the situation. Without getting to know individuals’ stories, much of the film felt dehumanising.”
Diyora Shadijanova, The i

“Shadow and Bone is pacy, brimming with twists and, at full pelt, great fun. Those who watched Game of Thrones for the nudity and cruelty may find it lacking that spicy kick, but this is fantasy with heart, a towering imagination and a genuine new take on the genre. It could be a real phenomenon for Netflix.”
Ed Power, The Telegraph